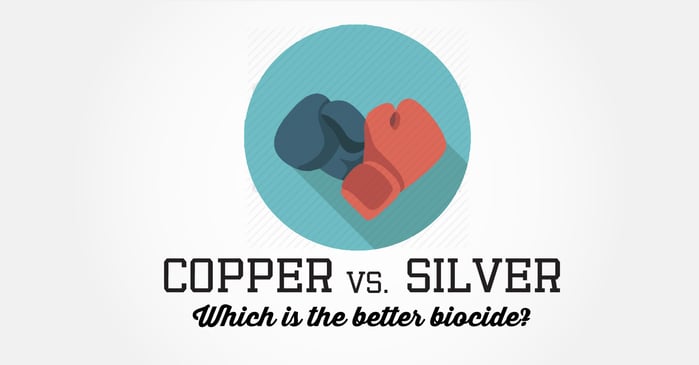 Since mankind began using metals, both silver and copper have been used to keep mildew, mold, fungi, and other spoilage at bay. Both metals were even known by the ancients to have anti-infection benefits. We know today that both silver and copper have biocidal properties, and as a result, numerous products have appeared on the marketplace touting these properties as effective in the fight against hospital-acquired infections.  Which is the better choice for use in healthcare facilities? To answer this question, we will compare the two metals across 6 criteria over the coming weeks.

Both copper and silver use the properties of ions (Ag+ for silver and Cu+ and Cu++ for copper) to disrupt the cell walls of bacteria. Ions, pushed to bond with a molecule in order to return to a stable electron number, become attached to cell membrane proteins. They weaken those proteins, which in turn weakens the membrane to the point of rupture, causing cell death. In addition, both copper and silver are taken into the center of the cell, where they disrupt the fragile DNA-making and metabolic functions of the cell.

The significant advantage, however, goes to Cu++, which produces superoxide, O2, which is highly toxic to bacteria (and is in fact produced by the body to kill invading bacteria.) Silver is not capable of creating superoxide.

And the winner is: Copper

You want a biocide that attacks bacteria in a variety of ways, the more kill mechanisms the better. Copper's two oxidized states means it kills longer, more efficiently, and more actively. The addition of the toxic superoxide adds even more efficacy to copper, creating the destructive free radical which causes further bacteria cell death.

So is Copper or Silver the better biocide? Read on to see the final ruling:

Part 2 compares silver and copper's biocidal activity. Tune in to see how effective these two metals are under a variety of environments.

Part 3 discusses the toxicity to humans of both metals, and why one is actually required for life.

Part 4 takes on the issue of resistance vs. tolerance, and reveals why lifeforms could never become totally resistant to one of the metals.

Part 5 reveals the costs of both metals and reveals our winner.

Want to learn more about copper's kill mechanisms? Click the link below.