Gene Editing: Brought To You By Bacteria 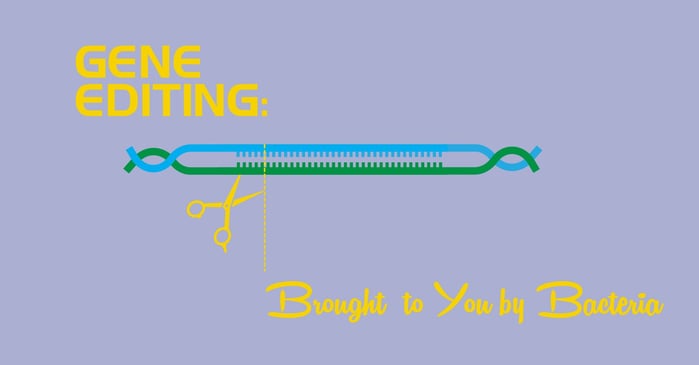 A few years back, a team of international researchers successfully used gene editing to correct a heart defect in human embryos. This is the first successful use of the CRISPR/Cas9 technology to edit the human genome, and hints at a future where we can delete disease-causing genes from future generations. What most people hearing this astounding news might now know, however, is that the CRISPR technology is not man-made, per se - it's bacteria-made. Today's post will explore how the future of gene editing was brought to us by the humble prokaryote, the bacteria.

The story starts with bacteria, single-celled organisms that can be found in soil, water, and our bodies. Bacteria have evolved with tremendous diversity to thrive in a variety of environments - dry, wet, hot, cold, even in the vacuum of space. Alongside these thriving bacteria colonies, however, have co-evolved their number one foe, viruses. Virus phages that attack bacteria, called bacteriophages, are terrifyingly robot-like capsules of protein that attach themselves to the bacteria wall. They inject their genome (fragments of DNA) into the bacteria's cytoplasm, where they will then hijack the DNA-replicating machinery in the bacteria cell to churn out hundreds of copies of the virus DNA. When the cell bursts, the viral DNA is released and go on to infect other bacteria cells.

But just as we have an immune system that defends us against pathogens, so do bacteria. One of the many defenses bacteria have evolved to fight off viruses is a set of genes called CRISPR genes, short for Clustered Regularly Interspaced Short Palindromic Repeats. These CRISPR sections of DNA contain parts of an invading virus' genome, and are used by the bacteria to identify and destroy the virus should it be detected. A useful analogy is those taped-up copies of bad checks you see at some convenience store check-outs. Just as the bad checks warn a cashier to not accept checks from certain individuals, the CRISPR genes warn bacteria about dangerous viruses.

It is this acquired immunity mechanism that has allowed us to edit our own genes. The "repeats" from the name CRISPR refer to a series of repeated sequence of DNA (the ACGT letters that make up our and every other living thing's genome) that indicate that a section of foreign DNA - that DNA acquired from the virus - is present. It would go something like this:

Now it's time to bring in the other section of the name we have given this bacterial defense mechanism: Cas9 (CRISPR Associated Gene 9). These are a set of genes that are found near the CRISPR repeats called Cas genes. These genes create a protein that is especially designed to target the foreign DNA, if detected, and slice it right out of the bacteria's DNA. There are many Cas genes, but the one that scientists have harnessed to edit our genome is the Cas9 gene.

Cas9 works this way: It unravels the bacteria's DNA and checks to see if any part of it matches the foreign DNA in the CRISPR segment. If it does, it cleaves it, that is, removes it, and replaces it with a harmless segment.

So how do humans use a bacterial defense mechanisms to edit our own genes? Well, we replace the "foreign DNA" (usually the virus DNA) in CRISPR and replace it with the faulty human gene - this is what Cas9 will seek out and splice out. Then we inject it as well as with a harmless segment to replace the faulty gene into embryonic cells, and allow the Cas9 protein to do it's job. If successful, the Cas9 will splice out the harmful part, and by providing the harmless segment as well, the natural DNA-repairing ability of the cell will replace the missing segment and reconnect the DNA. And voila, gene editing.

This is truly monumental progress towards the elimination of dangerous genetic diseases. However, due to the complicated way in which our genes interact, not many genetic diseases can unequivocally be connected to just one or two very specific gene sequences. For a few diseases that have been matched with specific genes, such as Huntington's and cystic fibrosis, the future may come much quicker. And all thanks to bacteria!

Editor's Note: This post was originally published in August 2017 and has been updated for freshness, accuracy and comprehensiveness.