It's Halloween week, so we are exploring one of the spookier microorganisms that can infect us. Today we explore the swimmer bacteria cell, Proteus, also known as the swarmer cell. This bacteria is one of the leading causes of catheter-associated urinary tract infections (CAUTI), but its ability to swarm makes it a threat to other organs as well.

The Proteus genus of bacteria is a member of the family of Enterobacteriaceae, a huge family of Gram-negative bacteria which also includes E. coli. This family of bacteria is facultatively anaerobic, which means that they can live with or without oxygen. This makes the organisms particularly good at surviving in both moist and dry environments - bad news for hospitals and their patients.

As if that was not spooky enough, Proteus, like other Enterobacteria, has flagella. Flagella, from the Latin word for "whip," are long, thin appendages that protrude from a cell body and propel the cell forward by moving in a propeller-like rotation. Many cells have flagella, from one to many, enabling them to move throughout a liquid medium. (Perhaps the most famous is the flagellum on the spermatozoa cell, allowing the cell to swim and reach the ovum.) Like tiny motors, these flagella are spun on rings of molecules and powered by the flow of protons across the membrane (cool animation here). It's pretty incredible to think that this fully biological machine (and the only one) evolved at all, let alone what capabilities it gives Proteus. 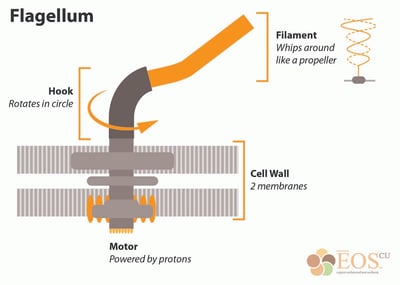 In the case of the Proteus family, the flagella are particularly adaptive (a capability that gave them their name, after the Greek god Proteus who could assume any shape). When in liquid, the Proteus flagella are arranged around the entire membrane of the cell, and each cell has from 4 to 8 of these peritrichous flagella. But when their environment becomes more viscous, sensory input triggers a change in Proteus that makes this particular bacteria truly spooky. Each Proteus cell, usually a short rod, becomes elongated to 10x its original length, and sprouts dozens and dozens of new flagella all over the newly elongated cell membrane (it becomes hyperflagellated).

Yikes! With this new shape and number of flagella, Proteus bacteria can travel faster through viscous environments. They can also become connected to other swarming cells to form a kind of raft, moving in unison over solid surfaces and promoting the creation of biofilms. These two capabilities make Proteus a dangerous pathogen for immunocompromised patients with catheters.

The pathogen is first introduced to the patient via their own skin or through contact with a contaminated surface such as a glove or instrument. Once in the lower urinary tract, P. mirabilis is able to reproduce efficiently, and in the presence of the indwelling catheter (a solid surface), the pathogen differentiates into its swarm cell form and travels up the catheter. Once on the catheter, the pathogen can also form a crystalline biofilm, a sturdy structure that facilitates adhesion of other bacterial cells, forming a tough layer of infection that does not respond to antibiotics - it must be removed physically.

P. mirabilis gains entry to the bladder either through the device itself (less common) or via the passage to the bladder that is made wider by the device. There it can survive on the urea not vacated by the catheter, and continue to reproduce. If left untreated (or if it does not respond to antibiotics), P. mirabilis can continue to swarm into the upper urinary tract, traveling up the ureters into the kidneys. The pathogen can create blockages in these narrow tubes, and if it reaches the kidneys, can lead to tissue damage as well as the creation of stones. Since the kidneys are our body's way of filtering our blood, any drop in kidney function means a risk of dangerous build-up of toxins. Toxins that remain in the body lead to further tissue damage, which can result in a domino-effect of organ failure.

Proteus, and other swarming bacteria, are the stuff of nightmares. The truly terrifying part is that they are incredibly common. In fact, CAUTI infections are the most common hospital-acquired infection (HAI). It is estimated that 50% of patients with a short-term catheter (up to 7 days) will get a UTI, and that nearly 100% of patients with long-term (>28 days) catheterization will get a UTI. This presents a particular risk to elderly patients in residential care or nursing homes. The Centers for Disease Control and Prevention (CDC) has published guidelines for CAUTI prevention, but patients and their advocates must also play a role. The single most effective way to reduce CAUTIs is by reducing the use or duration of use of catheters. Patients and their advocates should ask caregivers every day if the catheter is still necessary.

We hope this did not send you into too much of a pre-Halloween fright but instead helped inform you about the strange and bizarre world of Proteus and how to better protect yourself or a loved one if a catheter is ever needed. (Let us know if you think of a way to make a swarming hyperflagellated Proteus costume!)