Back to School Bacteria 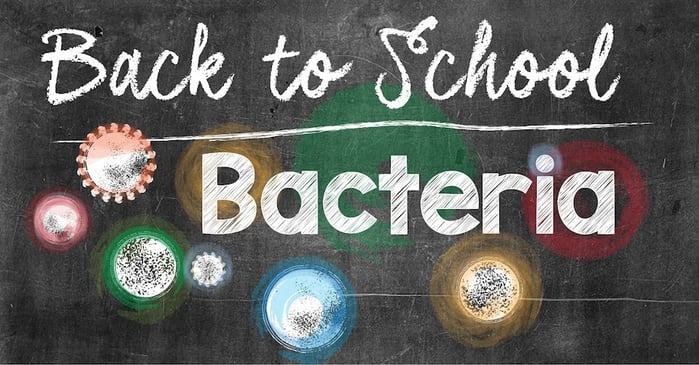 Millions of American children return to school over the next week, officially kicking off the academic year filled promise. Alongside the promise of learning new things comes another promise: The certainty of picking up some kind of bug that will cause anything from the sniffles to time in bed. Today we'll explore some of the major pathogens that strike in busy classrooms full of kids as well as a few steps you can take to avoid some of those hallway bullies.

Catching a cold or getting a stomach bug is a pretty routine childhood experience. A typical American child will get from 6 to 10 colds a year, and some will get other common childhood illnesses such as ringworm, pink eye, or even hand, foot, and mouth disease. Why do these seem to affect children so predictably? First, a child's immune system is still developing, so they don't have all the antibodies that an adult has. Second, children are far more likely to stick dirty fingers or objects in their mouths than an adult. And finally, children spend a great deal of time in schools filled with other children, in close contact.

So what are the major infections that get passed around the classroom? What pathogen is the bully behind the symptoms? How contagious are they? Let's find out about these bully bacteria, viruses, fungi and even an insect.

(And as always, this post is meant as a short introduction to common school ailments, and not intended to give medical advice. If you or a loved one has a medical concern, see a medical professional!)

Pink eye, or conjunctivitis, can be either bacterial or viral in origin. Both are very contagious, but viral cases can lead to more extensive outbreaks. Prevention is the same for both: Handwashing and not rubbing one's eyes with dirty hands. Preventing re-infection includes replacing any products used around the eyes (contacts, makeup, etc). Treatment sometimes requires an antibiotic, eye drops, or other medication.

Lice that infest the hair are by far the most common; lice that live on the body are rare and the only kind to spread disease. While spreading through hats, clothes and brushes is conceivable, it is not very common. Direct contact with hair, however, makes transmission far more likely. Lice is not caused by pets, poor hygiene, or unsanitary living conditions. Treatment is available in over-the-counter solutions, and all household members should be checked for lice for 2-3 weeks after diagnosis.

This is a common fungal skin infection caused by any of 40 of species of fungus and can occur on any part of the body. (On the feet, it's called athlete's foot, for example.) Ringworm, a circular rash, can come from another person with ringworm or an animal with the infection. Treatment for ringworm on the scalp, the most common form seen in young children, includes prescription medications by mouth. Handwashing and early diagnosis can help stop the spread of this infection.

This viral infection, abbreviated as HFMD, is most common in children younger than 5 years old because of their immature immune systems; however, parents of infected children may get the infection as well. It causes a rash, blisters or sores on the hands, feet, and mouth. HFMD can be caused by several viruses, but the most common is the coxsackievirus A16. It is spread through oral ingestion of water droplets, fluid from blisters, or from the stool. This virus is a common unwelcome visitor to daycares and preschools where there are lots of dirty diapers, potty training, and children who suck on their fingers. The virus usually runs its course in about a week.

This infection starts off like a cold, but then develops into a rash on the face ("slapped cheek rash") and on the body. It is far more common in children, and gets its name from its position (#5) on a historical list of common childhood illnesses. The good news is that if you get fifth disease, you are then immune from future infections.

For children, this skin infection is typically found around the nose and mouth, and occasionally on the arms and legs. It is characterized by a tiny blisters that reveal red skin that is then covered by a yellowish crust. Any open wound makes someone vulnerable to this infection, including insect bites and fungal infections. It is critical to keep cuts, scratches, and bites clean in order to avoid this kind of infection - the two main causes of impetigo, Group A strep and Staphylococcus aureus, are everywhere.

No, this isn't one of those horrific diseases from a Victorian novel - it's a fever and rash caused by the toxins released by a strain of Streptococcus. A person with a respiratory strep infection can sometimes get scarlet fever. The reason it carries with it connotations of gravely ill characters in a novel is because, if left untreated, it can develop into far more serious conditions, including rheumatic fever. In our modern age of antibiotics, this infection is mild and treatable.

This upper respiratory infection begins with a mild cough, but after about a week becomes severe coughing fits, after which the person gasps for air, making the characteristic "whooping" sound. This cough can last up to 10 weeks if left untreated. It is especially dangerous in babies less than a year old. Antibiotics, however, can control the infection and prevent further transmission, and a vaccine is now available to prevent the disease altogether.

Thankfully, many diseases that used to be a routine part of childhood have been almost eradicated thanks to vaccines. These include the highly contagious viral infections chicken pox,  measles (Rubeola), and mumps. However, American schools are beginning to see outbreaks of these and other formerly rare infections as more parents are choosing to not vaccinate their children. Decreases in the percentage of vaccinated children means that diseases can spread more quickly, possibly reaching immunocompromised individuals, babies too young to be vaccinated, and the elderly. It is for this reason that vaccination is required before entering school, but with non-medical exemptions being granted at record numbers, a school's student body as a whole may not be be as protected as it could be. Protecting children from bullies, whether a fellow student or a pathogen, takes a group effort.