Today we are thankful for... Vaccines. 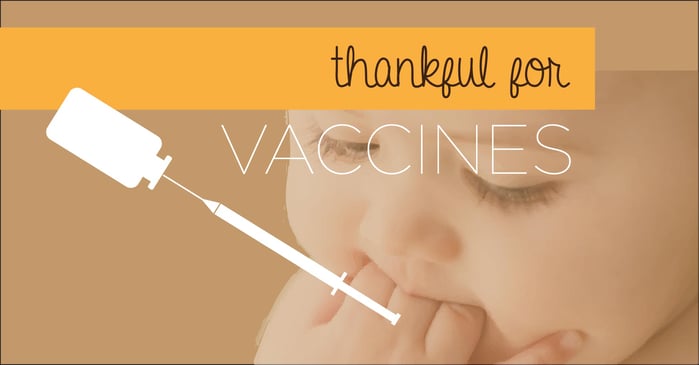 Our blog covers many topics in the healthcare field, most of which focus on preventable hospital-acquired infections. In honor of National Immunization Awareness Month, we focus on a different category of preventable infection, those viral infections that can be avoided thanks to vaccines.

Imagine the fear parents felt each time their child had a fever 100 years ago. Was it polio? Would it claim the life of my child as it did the child down the street? Or would he end up needing crutches to walk? Or imagine living during a time with a smallpox epidemic, which arrived every few years throughout the United States and the world. Would it reach your town, your home, your child? This was a fear felt by our grandparents or great grandparents, but it’s a fear none of us can really understand.

The fear of smallpox, polio, and other viral infections was alleviated with the discovery of vaccines. The success of vaccines has seen the eradication of smallpox and polio in the United States, and the very near eradication of diphtheria, pertussis, tetanus, measles, mumps, and more.

Before vaccines, waves of infectious diseases hit human populations around the world. In the United States, even 100 years ago, the fear of smallpox, polio, and other diseases were very real, especially for children under the age of 5. Even for those cases where the child survived, there was lasting injury including paralysis, deafness, and disfigurement.

But as author Seth Mnookin stated, “Vaccines have become a victim of their own success.” They work so well that the diseases prior generations saw as inevitable we now see as a thing of the past, gone forever. Why do we need vaccines, some people say, for diseases we don’t even see anymore?

It turns out the only disease that is completely eradicated is smallpox. All the rest of those diseases – polio, measles, mumps, pertussis, and others – are still very much a health concern. While cases are less frequent in the United States, travel is so easy these days that diseases come in through our borders on a regular basis. We need to successfully and fully vaccinate enough people to make sure that when these diseases enter the population, they are stopped in their tracks before an outbreak is possible. In this way, vaccinated individuals protect not only themselves, but also the weakest members of our population who cannot get vaccinated. This is called herd immunity.

We are thankful for vaccines, a medical breakthrough that finally gave us a way to fight the viral infections that swept through global populations year after year, causing illness, permanent injury, and death at inconceivable numbers (up to 90% of populations, in some cases). In just the past 20 years, vaccines have prevented 732,000 child deaths (and over 20 million child hospitalizations and 300 million children from getting sick). And the risk associated with vaccines is still extremely low, with a 1 in 1 million chance of injury.

Author Eula Biss describes vaccines as one of the most empathetic decisions we can make; she sees vaccine participation as “a system that’s based on people voluntarily using their bodies to protect other vulnerable people.”

And today, we thank everyone who played a role in developing vaccines, as well as everyone who decides to participate in protecting our most vulnerable members through immunization.