With life, there is illness. Some of the earliest examples of life on Earth, bacteria, show evidence of invasion by viruses. Our earliest recorded history includes written accounts of individuals trying to make sense of illness and injury. These early records, and the experiments and efforts that accompanied them, are the first examples of the scientific method which resulted in all our modern advances, including evidence-based design.

The design of healthcare environments has a rich history. For millennia in the Western world, healing was associated with religion. While home visits by healers was the norm, healers and their arts were also practiced at holy sites: Outdoors in nature at spots selected by religious leaders, and later, temples, cathedrals, or spaces built by the religious orders that operated them. Design, in these cases, was focused on bringing the patient closer to his/her deities while enabling the healers to perform their duties.

Hospitals as a site for excellent medical care are largely a modern invention. In the past, the best care was provided (for a hefty fee) by private visits in the home. The more you could afford, the better your visiting healer could be - royalty could afford to import experts, while those with more modest means could employ the healer with the best reputation in their area. Only the poor would have to leave their homes to seek out medical care. Throughout the ancient world, medical care was provided to those who could not afford a private doctor at central locations. 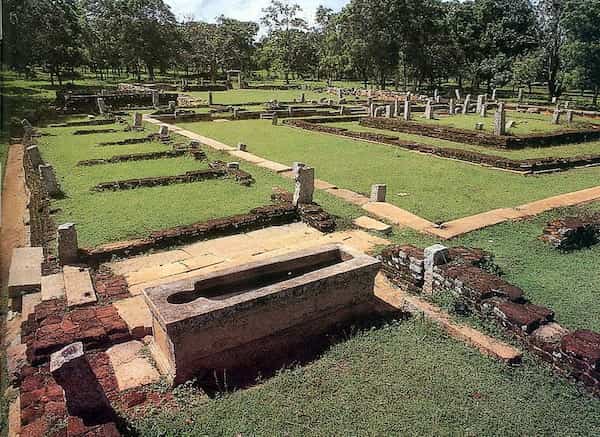 The earliest well-recorded example of a building dedicated purely to the treatment of illness and injury comes from Sri Lanka, around 400 BCE. This hospital was situated within a large monastary campus and featured multiple buildings and medical baths (seen above). The ancient Greeks and Egyptians had temples of healing, where individuals from all walks of life could be blessed or have basic treatment. The Medieval Islamic world, which left an enormous scientific legacy, included a hospital established in Baghdad in 700 CE, complete with wards and a staff of dedicated physicians. This hospital served as a model for the hospitals built throughout this geographic area, which in turn influenced medical practice in Medieval Europe. Still deeply associated with religious orders, hospital for the next 500 years were almost exclusively church-run.

At the point when science and religion began to branch into separate disciplines practiced by separate individuals, the issue of hospital and healing design came under more scientific principles. The first attempts were being made to make decisions about design not just for the convenience of medical staff, but also on the patients themselves.

Our next post will look at a period of 100 years which saw radical improvement in hospitals and healthcare, improvements which catapulted us into the modern age of medicine.