The Dirt on Garden Bacteria 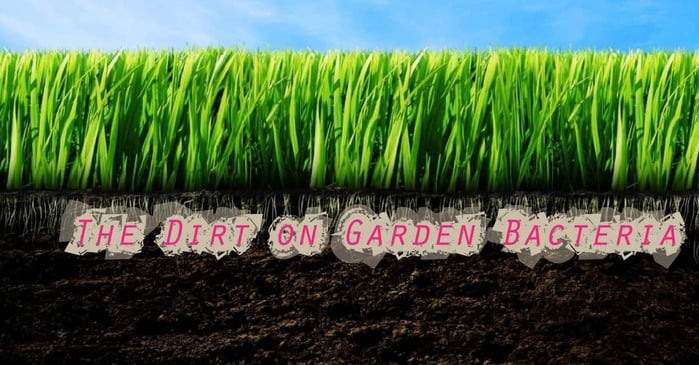 As winter ends and spring begins to arrive (and stay), many of us will find ourselves elbow-deep in soil, getting our gardens ready for the season. While we are selecting our annuals, clearing out weeds, and picking out our vegetable plants, there is an army of workers already at work in our gardens: Bacteria. Billions and billions in one handful, these microscopic organisms are performing essential actions that enables us to grow a beautiful garden and grow nutritious food. Today we will explore these unseen workers and how, depending on where they are, they can be either life-sustaining or life-threatening.

The very reason we are alive today is thanks to bacteria. This is no overstatement - without bacteria, there would be no oxygen to breathe, no plants to eat, and no animals, including us. To understand why, we have to travel back in time about 3.8 billion years ago, when the first single-celled life forms evolved. These gradually included the cyanobacteria that are responsible for releasing oxygen as a byproduct of their metabolism into the atmosphere. Oxygenation led to the explosion of life we know today. But even as more complex life evolved, bacteria remained - in abundance. The bacteria present in the soil was able to break the tight bonds of atmospheric nitrogen into forms that were readily used by plants, enabling them to thrive and cover the Earth. These bacteria continue to perform this key function for plants, enabling a rich and diverse food chain that sustains life on Earth.

Not only do bacteria break down nitrogen, they also are the main decomposers in nature, alongside fungi. The billions and billions of bacteria found in soil are responsible for breaking down organic matter into useful components other organisms can use. (Think of them as a all-purpose recycling plant that breaks down a vast array of items into their essential materials, ready for factories to use to create new items.) Some bacteria are even capable of breaking down rocks and minerals (lithotrophs), releasing those important elements into nature for use by other organisms.

Bacteria have evolved incredible abilities that enable them to survive in extreme conditions, during periods of drought, without sources of energy, and all manner of deprivations. There are billions of bacteria in our own bodies, adapted to providing critical functions that allow us to live. However, abilities allow them to survive until they can thrive in your garden, but also become a serious problem when bacteria end up in wounds, medical devices, and sterile parts of our bodies. (This is why there are no living plants in hospitals, why you should never bring flowers to anyone in a hospital, and why immunocompromised patients are advised not to garden.)

Here are just a few adaptive abilities that make bacteria great in soil but dangerous in hospitals.

Biofilms: In nature, bacteria have adapted to survive in thin layers of moisture surrounding the roots of plants, in particular legumes. Here they can stick together to create a tight layer that keeps them - and the soil around them - stable and working efficiently. This incredible ability makes bacteria very dangerous in healthcare environments. When these biofilms form in hospital sinks, in catheters, and inside our bodies, the resilience that keeps the bacteria alive in nature presents a serious threat to human life. Biofilms in sinks enable bacteria to share resistant genes, defend against disinfection, and render parts of the colony impervious to antibiotics.

Extreme Survival: Bacteria have adapted to long periods of inhospitable conditions. Billions of years of evolution and countless generations have enabled bacteria to survive hot, cold, dry, frozen, airless, acidic and even deep subterranean environments. In periods where they have access to required nutrients, their reproduction explodes and they can double every 15-30 minutes. When they find themselves in a warm, moist environment surrounded by organic matter - say, a surgical incision or lung tissue or a urinary tract - this explosion in reproduction leads to a dangerous infection that can quickly become life-threatening.

Spores: Some bacteria can survive even longer thanks to an adaptation causing them to create spores (or other similar structures such as endospores). Instead of reproducing by splitting in two, spore-forming bacteria in a stressful environment will produce a spore, a drier, hardier structure containing DNA. When exposed to nutrients and moisture, this spore will then expand and divide into the standard bacteria structure. These bacterial spores can survive months and even years in the harshest conditions. Some of the soil bacteria that have adapted this ability are those in the Clostridium family, including Clostridium difficile. This pathogen, adapted to life in soil, is a leading cause of HAI deaths, especially to patients over the age of 65.

Bacteria make up by far the most living organisms on Earth. They are essential to the very presence of complex life, as well as the continued survival of us all. Their innate ability to compete keeps us healthy, and some species have even provided life-saving antibiotics that we can use when our own bacteria or immune systems can't fight off an infection alone. Our job, the job of every infection preventionist, environmental worker, every nurse, physician and even the patient and caregiver, is to keep bacteria where they do belong, and out of where they don't.