Why are C. difficile spores so hard to kill? 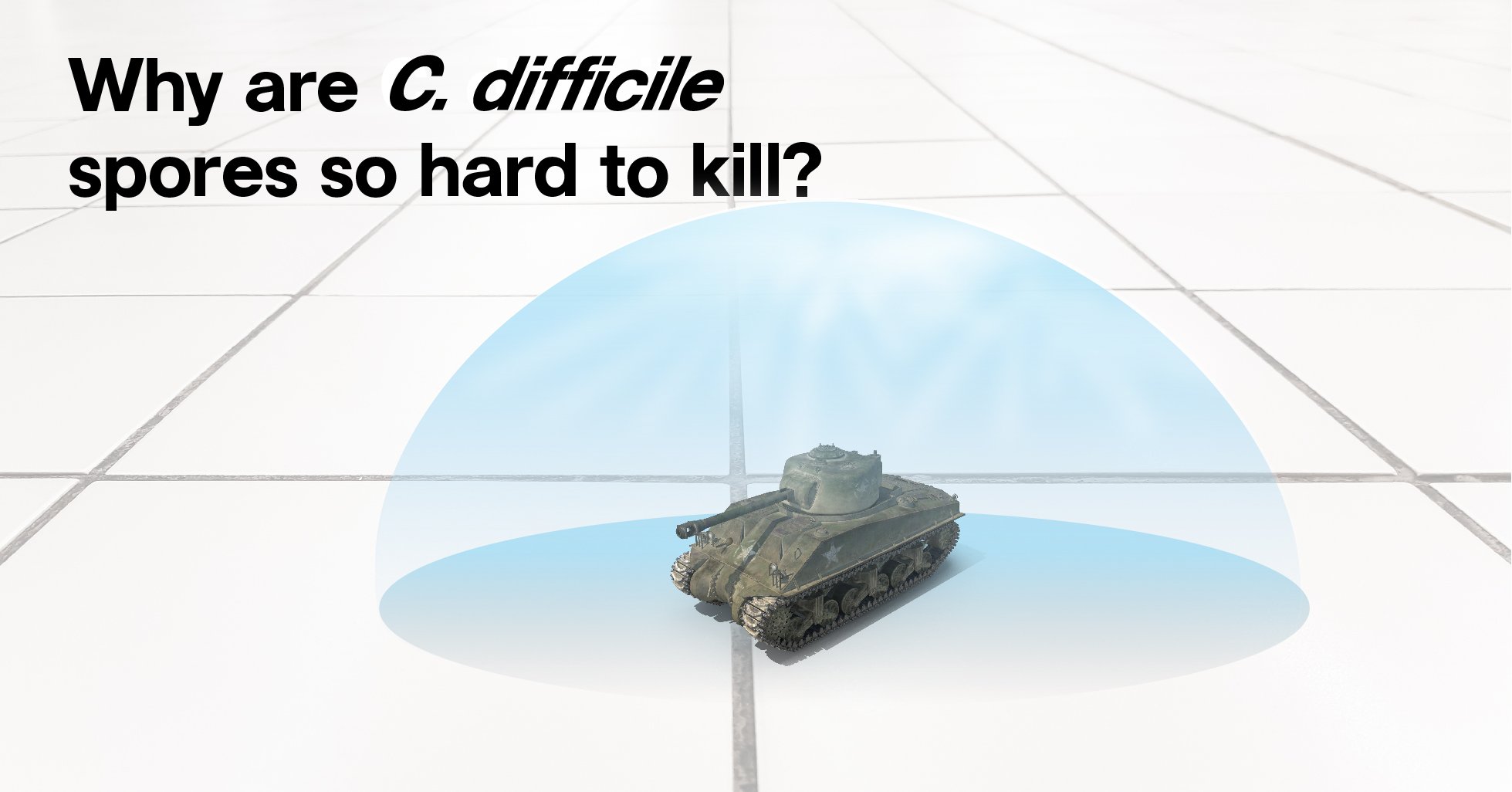 This week saw epic snowfalls in the US, assuring us that winter is very much upon us. For those of us who live where it gets colder and colder this time of year, we may be finding ourselves wrapping ourselves up more as we go out, bundling up to stay cozy inside, and generally getting ourselves situated to make it through the cold season. We are reacting to our environment, just as bears prepare to hibernate, and birds prepare to migrate. Microorganisms react to their environment as well, with some bacteria having the ability to produce spores in order to survive outside a host. In today's post, we will examine one such bacterial spore, one that causes hundreds of thousands of infections each year and tens of thousands of deaths: Clostridioides difficile.

Clostridioides difficile, formerly Clostridium difficile, is a gram-positive, anaerobic spore-former, which means it has a thick, protective shell, can survive without oxygen, and creates an even better-protected spore when it encounters a challenging environment outside the body. (Microbiology nerds can find out more here.)  Many of us have C. difficile bacteria in our gut, where it is crowded out by a healthy microbiome and poses no threat. But if we take strong antibiotics, many of those microorganisms that are crowding it out get eradicated, leaving room for the resistant C. difficile to take over and cause a life-threatening infection. The symptoms of the infection also cause significant shedding of infectious spores into the environment, making transmission to other hosts easier. C. difficile infections (CDI) are particularly dangerous to individuals over age 65, long-term residents of hospitals or nursing homes, and people with weakened immune systems.

One of the unique dangers of C. difficile is that its spore form allows the bacteria to remain in the environment for months, ready to become re-activated the moment it reaches a vulnerable host. Unfortunately, not only is the vegetative (active and reproducing) C. difficile resistant to many antibiotics, the spore form (dormant) is quite difficult to kill with common hospital-grade disinfectants. Many cases of C. difficile can be traced back to a contaminated environment, to a reservoir of spores that might have been deposited weeks or even months before.

What makes C. difficile spores so resistant to cleaners and disinfectants? When the vegetative cell encounters a threat (oxygen or antibiotics), it begins to produce spores by dividing in such a way that instead of producing two clone vegetative cells, it produces one packet of complete DNA that becomes the core of the spore and one cell of cytoplasm that engulfs the core and adds on layers of protection.

At the center of the spore is a dehydrated core that contains all the necessary DNA, RNA, ribosomes and enzymes necessary to return to vegetative state once it is back in a safe environment (like your gut). The DNA is held by special proteins that keep it hydrated just enough while also protecting it from heat, chemicals, and ultraviolet rays (such as from UV room disinfection).

Around the core are further layers, some for protection and others to form the future vegetative form. The inner membrane prevents DNA-damaging 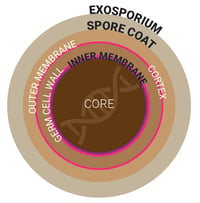 compounds from reaching the core. This membrane is surrounded by the peptidoglycan germ cell wall that will become the vegetative cell wall once re-hydrated. The large cortex layer also is made from peptidoglycan, but modified to crosslink that can be re-hydrated selectively by specific enzymes. The outer membrane is thin and serves to keep the cortex separate from the surrounding spore coat, which is made from proteins that defend against enzymes, chemicals, and biocides (disinfectants). Finally, the exosporium (which is not present in all spore-formers) provides defense against enzymes, ethanol, and heat.

But what about spores that are missed? Not every surface can be doused in bleach or other toxic chemicals throughout the day, especially near a patient! And even the best terminal cleaning can leave C. difficile spores behind. Thankfully, there is growing research that copper-infused, self-sanitizing EOSCU demonstrates efficacy against C. difficile spores, killing up to 98% of spores within 4 hours. This solid surface material contains reactive copper ions, whose biocidal properties destroy the spores continuously and safely, right in the patient area as well as in bathrooms, laundry rooms, and workstations. While the spore can evade many disinfectants and even UV radiation, copper ions have the properties necessary to get the job done.

What are your experiences with C. difficile spores? Share your thoughts in the comments below!