The Pathogens That Made History: Consumption, Part 1

Before we knew about germ theory and the microorganisms that caused disease, the illnesses that afflicted millions were mysteries. They acquired names that described their symptoms, their effect on behavior, or on the sheer numbers of people they killed. Without knowing anything about causes, treatment, or prevention, our ancestors feared “the wasting disease,” saw friends and relatives fall victim to “bilious fever,” and cared for loved ones stricken with “child bed fever,” “yellow jacket,” or “dysentery.”

With diseases such a significant part of human existence, it is no surprise that they found their way into literature, art, music, and the cultural imagination. Treatments, cures, prevention, and healing were so arbitrary, so inconsistent, and so out of human control that who, and when, and how the diseases struck seemed to have almost a supernatural origin, a sentiment that came to associate diseases with morality (basically, if you, or society, is evil, you will get sick). Certain diseases came to be associated with characters that were pure and innocent, while others seemed to carry with them the connotation of evil or depravity. Disease and illness was more than just a plot twist, they informed readers about a character's morals, symbolism, and humanity.

Fortunately, by the 20th century, germ theory and the discovery of antibiotics and vaccines brought these diseases back under the control of human hands. But the legacy of these centuries of affliction have left their mark on literature and the arts. This short series will investigate one of those diseases that so mystified our ancestors and the pathogen that caused it. 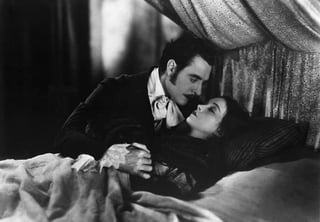 Lillian Gish and John Gilbert in La Boheme, 1926  | Mimi is just one of the many female characters suffering a slow death from consumption

Perhaps the most romanticized of historical diseases is consumption, or the “wasting disease.” Many novels, operas, plays and paintings feature a long-suffering heroine, racked by coughs, pale, weak and wasting away in a bed, as consumption slowly steals away her life. Mimi in La Boheme, Violetta in La Traviata, Katerina in Crime and Punishment, Fantine in Les Miserables, Little Eva in Uncle Tom’s Cabin, all victims of the disease which came to be associated with poverty, malnutrition, and the oppressed. In literature and theatre, consumption tends to strike innocent female characters representing the neglected victims of economic disparity, showing how their cramped conditions and a merciless society ultimately claim their lives, (while providing some of them with redemption for mistakes in their past).

Teofil Kwiatkowski, Chopin on His Deathbed, 1849 | Chopin succumbed to consumption at age 39

Alongside the female heroine wasting away from consumption is another character archetype whose consumption played a significant role: The creative genius. Due in part to the fact that many great artists themselves suffered from consumption, this character could be a writer, a painter, a composer, any feverishly passionate and creative individual whose short life was filled with magnificent works of art. He seems to be sustained by his art alone, as his body is slowly claimed by the disease. Real-life poets and artists with this disease include Robert Louis Stevenson, John Keats, Honoré de Balzac, the Brönte sisters, Elizabeth Barrett Browning, Albert Camus, Frederic Bartholdi, Washington Irving, D. H. Lawrence, Frederic Chopin, … the list goes on and on.

This list is so long because consumption was contagious, chronic, and pervasive: It was the cause of more deaths than any other disease during the 19th and 20th centuries. Up to 90% of the city-dwelling populations in Europe and North America carried the pathogen which causes the disease, and if it progressed to the active illness, 80% of patients died. To put that in perspective, that’s about the mortality rate of HIV if left untreated.

What was “consumption” - this “white plague”? Read next week's post in this series to find out.