The Pathogens That Made History: Consumption, Part 2 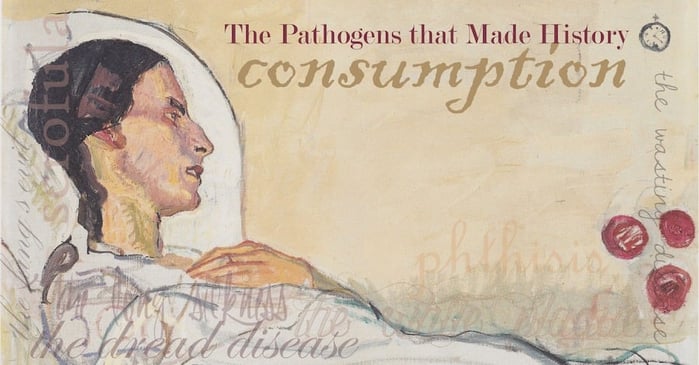 In last week's post, we described a pervasive disease that so affected the global population that it found its way into visual, musical, and literary works of art for centuries. What was this horrible disease?

Tuberculosis is a contagious bacterial infection caused by Mycobacterium tuberculosis. This bacterium is a rod-shaped pathogen that is transmitted through contaminated droplets expelled when coughing, sneezing, spitting, and even speaking. Once infected, a person can either carry the infection in a latent state, experiencing no symptoms, or develop an active infection right away, typically racking coughs, weight loss, chills, and night sweats. 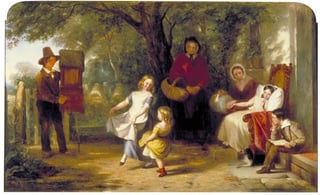 In the latent state, the body's immune system builds a kind of shell around the bacteria, walling it off from the body and preventing active sickness. Some individuals will live with latent tuberculosis without ever getting sick. On the other hand, immunocompromised individuals are especially at risk for developing secondary progressive tuberculosis, when the protective shell around the bacteria is broken down, releasing the bacteria back into the body. Individuals with HIV, smokers, and those suffering from malnutrition are particularly vulnerable. In these individuals, the infection can also spread through the bloodstream to affect the kidney, spine, and brain. 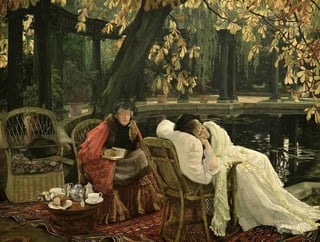 James Jacques Joseph Tisso, A Convalescent, c. 1876 | Those who could afford to would move to warmer climates in pursuit of health.

In the past, it was thought that warm, dry climates were helpful for those with chronic tuberculosis. This practice found its way into many novels and artistic works, with Europeans traveling to tropical lands such as Egypt or Rome to recuperate (and, of course, have adventures). Once it was discovered that tuberculosis was a contagious infection (in 1882), treatment turned to isolation, specifically, in sanatoriums set up just to treat tuberculosis. These remote hospitals also pop up in literature from that time period, with characters spending time away to recover, or visiting loved ones in a bucolic sanatorium, or other plot elements. Another lasting impact of this era was the idea of a public health campaign: Local and state government agencies worked together to educate the population about preventing the spread of tuberculosis.

Any number of “treatments” were on the market to help alleviate or cure consumption and other pulmonary diseases, but a true weapon was discovered in 1943. Selman Waksman isolated streptomycin from a humble soil fungus, an antibiotic he found to be effective against tuberculosis. Because it quickly developed resistance, a synthetic version was developed in 1944, and together, these drugs began to reverse the global impact of tuberculosis. Today’s treatment of tuberculosis is a 6- to 12-month course of strong antibiotics. There is also a vaccine which is administered to children in areas where tuberculosis is still common.

Is tuberculosis a thing of the past, a disease only seen on the last pages of Romantic novels and climactic scenes in operas? Absolutely not.  It is estimated that 1/3 of the world’s population is thought to be infected with latent tuberculosis, leading to 10 million cases of active tuberculosis in 2020 alone. 95% of deaths are attributed to TB each year take place in developing nations. It is still a leading cause of death world-wide. 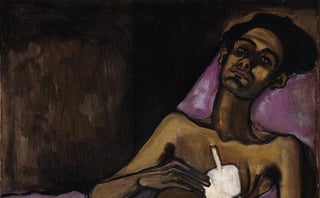 Alice Neel, T.B. Harlem, 1940 | Tuberculosis continues to be a threat in developing countries and among impoverished communities.

It is in these developing nations that the threat of hospital-acquired tuberculosis is a real concern, with crowded healthcare facilities without stringent infection control practices providing an opportunity for transmission, especially among immunocompromised patients and those suffering from malnutrition. There are efforts to increase vaccination in these areas, as well as to prevent transmission, but there is still work to be done. Unfortunately, the literary and visual arts from these areas may continue to be influenced by this disease for years to come.

Global efforts by the World Health Organization have made a difference. They report that the TB death rate has dropped 11% between 2015 and 2020, and that 66 million lives have been saved through diagnosis and treatment between 2000 and 2014.

If you want to help in the effort to eradicate tuberculosis, here are a few organizations to get you started.

TB Alliance International effort to discover new, more affordable TB treatments and get them to those in need.