5 Bizarre Beliefs About Germs from the Not-So-Distant Past 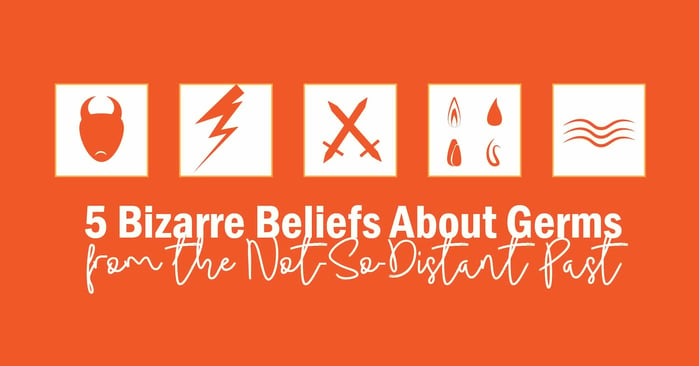 We live in a time of tremendous advancements in science and medicine. We can save premature babies, reattach severed limbs (how about heads?), and research looks promising to wipe out some pretty terrifying diseases. And yet even recently, humanity still believed some pretty crazy things about where diseases come from... and each of them share haunting similarities to some beliefs we encounter today.

The era of witchcraft, bloodletting, and bad spirits seems so far removed from today's medical practices. But not too long ago, we lacked some fundamental information about what made us sick. Here are some of the most bizarre beliefs about infection that formed the basis of medical care not too long ago.

As scientific discovery and medical practice advanced, researchers began to look for patterns in disease. However, a prevailing belief from the ancient Greeks proved especially difficult to discard: Disease is spread through toxic air, called miasma.   Even with our knowledge of germs and transmission, it's easy to see why this idea was so compelling. Disease did seem to spread throughout a community much like a wind or a mist. It took painstaking work by John Snow, a physician in the mid-1800s, to demonstrate that disease could be spread through contaminated water, and further work by Robert Koch in the late 1800s, to demonstrate that the connection was a physical germ spread through contact. (But just ask any infection preventionist if everyone on their team acts accordingly!)

Thankfully, we live at a time when scientific knowledge has led to great medical breakthroughs. We should not forget, however, how difficult it has been over time to let go of familiar but incorrect explanations of the world around us. We need to remember this so that when the time comes to let go of our own old beliefs and accept new discoveries, we are willing and able to move forward. For example, those of us in the world of infection control and prevention still struggle to get colleagues to wash their hands, maintain hygienic surfaces with the correct cleaners, and follow proper sterile protocols during procedures. Even though we are no longer in the Middle Ages, or working in a 1850s hospital ward, we face some of the same struggles as John Snow, Ignaz Semmelweis, and other pioneers. Let's remember (and learn from) our medical past so that we can can make a better medical future.

Editor's Note: This post was originally published in January 2018 and has been updated for freshness, accuracy and comprehensiveness.