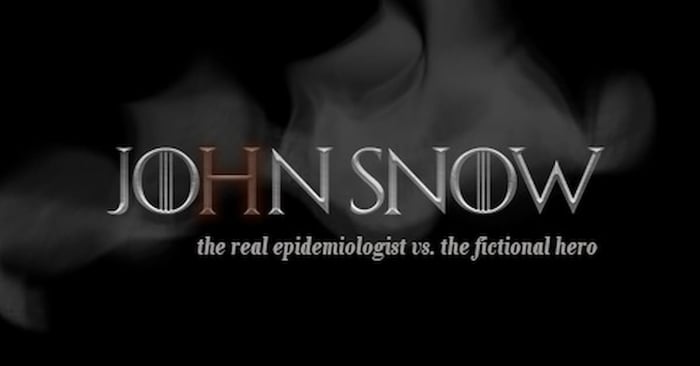 These days, most people hearing the name “John Snow” will think of the character Jon Snow from HBO’s Game of Thrones, a hugely successful series based on the books by George R. R. Martin. Many of the 6 million+ viewers of this fantasy series may not know that there was another John Snow, perhaps one without the coal-black curls and swarthy good looks, but a man who changed the world of medicine and saved millions of lives. What does a fictional hero who wields a magical sword to destroy the undead atop a 700-foot wall of ice have to do with a Victorian-era physician who wielded nothing heavier than a fountain pen as he collected thousands of data points in a 1-square-mile neighborhood of London? The answer may surprise you!

Today, John Snow is recognized as the father of epidemiology, the study of infectious disease outbreaks. During his lifetime, however, he was known as a respected anesthesiologist who proposed some outlandish ideas about the spread of disease. His early work proposing a connection between store-bought bread (with added aluminum) and rickets, a pervasive childhood leg deformity, was ignored. (Science would prove him correct 60 years later.) His idea that deadly cholera outbreaks were microbial in origin and transmitted via the fecal-oral route (ingestion of water contaminated with feces from an infected person) were rejected and criticized. Despite these setbacks. John Snow continued being a rebel, pursuing the data to back up his theories and presenting the data visually in one of the world’s first infographics.

Meanwhile, the fictional Jon Snow faces similar struggles (albeit having perhaps less of an impact on the world’s health, but that could be debated). As we will see, his fictional struggles serve as an analogy to John Snow’s, and in some ways, to the experiences of any scientist on the cutting edge of discovery. [WARNING: There are some spoilers!]

Just as Jon Snow had to continue to defend his ideas in the face of opposition, betrayal and death, so do many of history’s innovative scientists. John Snow is not alone in being ignored or rejected for his scientific ideas. Ignaz Semmelweis was laughed out of the room for proposing that doctors transmit disease by not washing their hands. Alfred Wegener’s ideas of continental drift were not accepted until 30 years after his death. Many scientists were ignored (and even punished) for proposing a heliocentric model of the solar system. Innovators are, by nature, rebels and fighters, even if they wield pens instead of swords. Think of these scientists if you begin to doubt that John Snow isn’t a heroic equal to the swashbuckling Jon Snow!