We have so many individuals to be thankful for when it comes to advances in healthcare. From the author of the Kahun medical papyrus, dated at 1800 BCE (and thought to be a copy of an even older document), to the modern-day scientists developing genetically-based cancer treatments, the history of medical science is rich with brilliant innovators. Alas, not all of those innovators were celebrated in their day, while others were even vilified.

We would like take a moment on this Thanksgiving day to recognize two pioneers in medicine who dedicated their lives to something we are passionate about, infection control. One of them is practically a household name. The other has, sadly, faded into the mists of time despite his work. 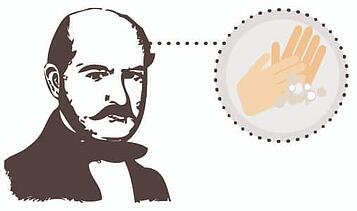 Laughed Off the Stage

The first pioneer we would like to recognize is Ignaz Semmelweis, a German-Hungarian physician from the mid-1800s. He worked in state-run childbirth clinics for the neediest women of Vienna, some of whom lived on the streets. He discovered that patients had a much, much higher chance of getting puerperal fever (childbearing fever) if they gave birth in one particular clinic compared to other clinices, or even giving birth in the streets. Confounded by this pattern, he collected data from all the childbirth clinics, ruling out as many possible causes as possible, from climate to procedures. No differences emerged except for staff. When, by tragic chance, his colleague and friend died from an infection he contracted after being accidentally cut by a scalpel during an autopsy, Semmelweis saw a connection between his friend's symptoms and those of the infected mothers. He deduced, and then proved, that the women were being infected by the contaminated hands of physicians who had recently conducted autopsies and had not washed their hands. He immediately set out to require that all the clinic staff wash their hands between procedures and the result was a 90% decrease in puerperal fever. This procedure was then adopted by all the area clinics. When he took his discoveries to the broader medical field, however, he was ignored. Semmelweis could not point to a specific reason why hand-washing helped (germ theory had not yet been discovered), and without that reason, he was dismissed. If only the medical field of the time had listened, so many lives could have been saved. Thank you for trying anyway, Ignaz. 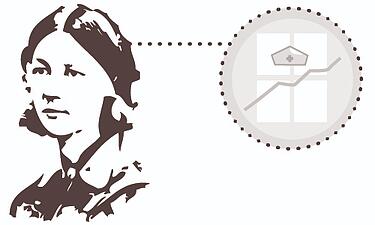 The second pioneer and household name is Florence Nightingale. We have so much to be thankful for from this incredible innovator, from the foundations of nursing practice, to the popularity of presenting data graphically (infographics, what would we do without you?). However, her contribution to the design and planning of hospital spaces is what makes us particularly grateful. Under her consultations, hospitals changed from institutional, almost prison-like spaces to the nature-inspired, sunlit spaces we are more familiar with today. Prior to Nightingale, hospitals were dark, utilitarian, and badly ventilated. She recognized the evidence-based benefits of sunlight, access to nature, and good ventilation, which led to her contributions to what was known as the "pavilion" system of centrally-located nursing stations with patients arranged on wards radiating these hubs. Even outside of medicine, Nightingale's influence was dramatic. She took on so-called experts and helped change public health laws, ensuring that both private and public buildings had to participate in public sanitation and sewage. This change alone, at a time when the worst epidemics resisted every medical intervention available, is believed to have increased the national life expectancy by 20 years! Her work was meticulous, her records produced convincing data, and her legacy surrounds us today. Thank you, Florence.

These two pioneers remind us of two important lessons, which could be seen as two sides of the same coin.

First, our greatest innovations (and innovators) break the mold, color outside the lines, and challenge assumptions  We must learn from the life of Ignaz Semmelweis not to dismiss a new idea because it seems far-fetched or impossible. We must examine the research and listen.

The second lesson is that innovation must come with meticulous evidence and data followed by careful and patient education, communication, and convincing to questioners and even to doubters. If Nightingale hadn't persisted in her work, collecting her data while also presenting that data in a variety of ways, to the specialists as well as the laypeople, modern medicine may not be what it is today.

We hope our message of thanks has helped you appreciate these two heroes of medicine. Happy Thanksgiving!