Gram Positive vs Gram Negative Bacteria and the Fight Against HAIs

In formal descriptions of the germ-fighting powers of antibacterial and biocidal products, the terms "Gram positive" and "Gram negative" are used as a way to categorize bacteria. While there are estimated to be over 10,000 species of bacteria, they can be categorized into a few helpful categories.

One of those categories has to do with the structure of the cell membrane. All the known bacteria fit into one of two categories of cell membrane structure: Gram-positive or Gram-negative. But what does that mean?

Let's first look at where "Gram" comes from. In this case, Gram - with a capital G - refers to the Danish bacteriologist Hans Christian Gram. In 1884, Gram devised a test to identify whether or not a bacteria had a peptidoglycan (a mesh-like layer of sugars and amino acids) wall. In his test, a dye was introduced to the bacteria. If the bacteria had a thick peptidoglycan cell wall, it absorbed the dye and turned purple - it tested positive for peptidoglycan. If it did not turn purple, it tested negative for peptidoglycan, meaning, its peptidoglycan layer was thin. As this method was adopted, the resulting categories were called "Gram positive" and "Gram negative." This method of "Gram staining" is still a widely-used, standard procedure in microbiology.

Now we can look at some of the most important differences between Gram-positive and Gram-negative bacteria in the fight against HAIs. The reason EPA public health claims, and as a result, products, clarify that testing includes both Gram-positive and Gram-negative bacteria is that they have different levels of resistance to cleansing products, different reactions to dry surfaces, and other important distinctions. 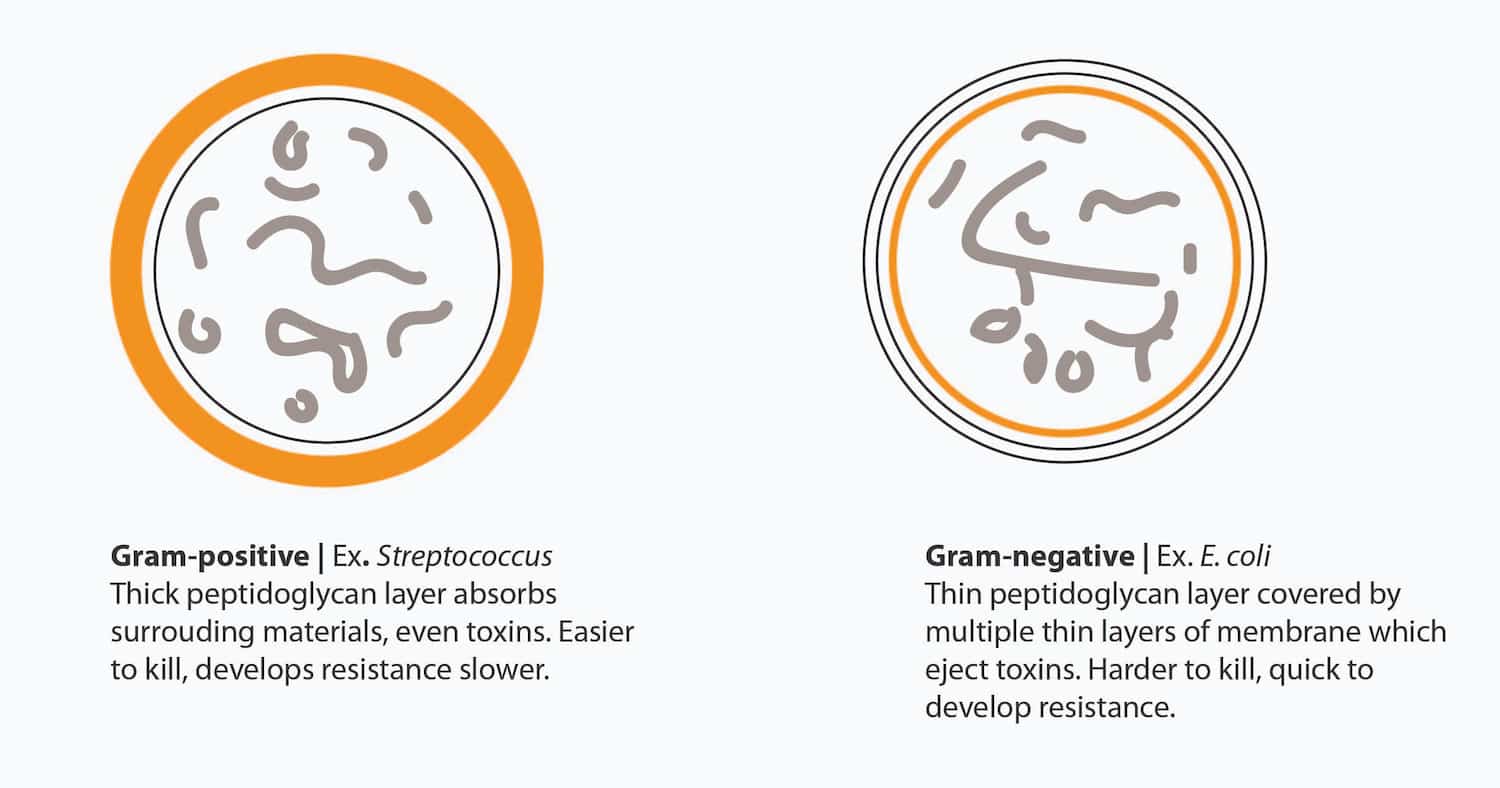 However thin their peptidoglycan layer, Gram-negative bacteria are protected from certain physical assaults because they do not absorb foreign materials that surround it (including Gram's purple dye). Imagine a spacecraft with a series of airlocks. Any intruder would have to make their way through these airlocks before entering the ship. Such is the case with gram-negative bacteria. Their additional membrane allows them to control what reaches the inner airlock, enabling them to sequester or even remove threats in that space between the membranes (periplasmic space) before it reaches the cell itself.

Finally, Gram-negative bacteria are more intrinsically resistant to antibiotics - they don't absorb the toxin into their insides. Their ability to resist traditional antibiotics make them more dangerous in hospital settings, where patients are weaker and bacteria are stronger. New and very expensive antibiotics have been developed to combat these resistant species, but there remain some superbugs (MDROs) that nothing can kill. Not only do the Gram-negative bacteria's natural defenses keep out these antibiotics, some even have an acquired resistance to antibiotics that make it to their inner cell bodies.

Editor's Note: This post was originally published in August 2015 and has been updated for freshness, accuracy and comprehensiveness.