What is Community-Acquired MRSA? 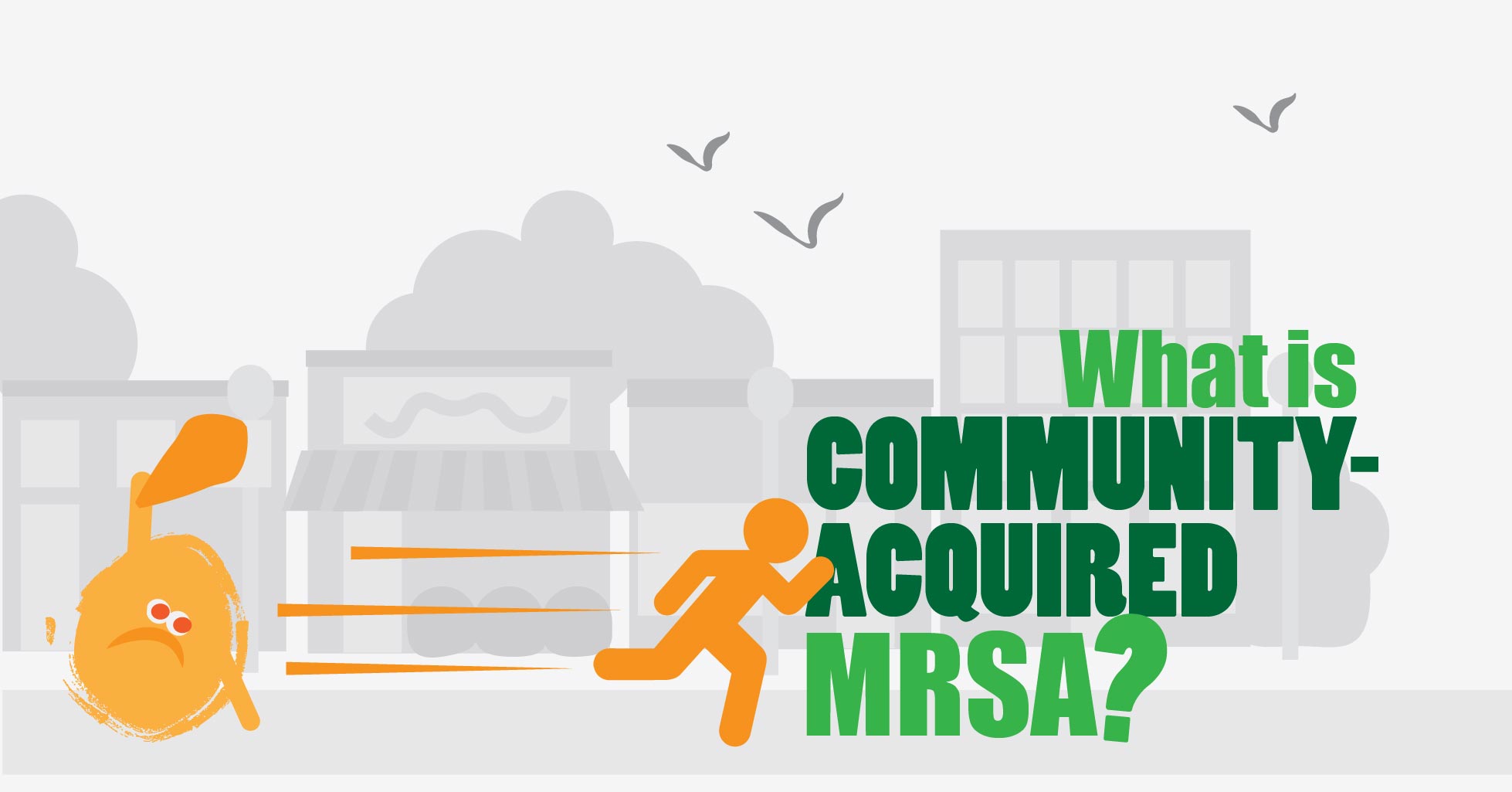 Most antibiotic-resistant MRSA is found in hospitals and healthcare settings, places where strains of the common Staphylococcus aureus have evolved to resist these treatments. But there is a type of MRSA that is spread outside of healthcare settings, among healthy individuals. This type is called "Community-Acquired MRSA," and can also be difficult to treat. Today we'll explore what sets this particular strain of Staph apart from its more harmful, hospital-associated cousin.

First let's start with a brief overview of MRSA. Spelled out, MRSA is Methicillin-Resistant Staphylococcus aureus. The first part of the name indicates that the strain is resistant to, which means it is not easily killed by, methicillin-type antibiotics. This class of antibiotics is the first line of defense against bacterial infection and was developed to kill the most common bacteria families: Staphylococcus (Staph) and Streptococcus (Strep).

How do strains of Staph develop a resistance?

The bacteria didn't get together and plan it, thank goodness. But all they had to do was wait for bacteria with a certain mutation that allowed them to survive the treatment to reproduce and pass along that resistance.

How did MRSA leave healthcare settings?

Research indicates that MRSA leaves hospitals and other healthcare settings via discharged patients colonized by MRSA and health-care workers, but also occurs all by itself ("de novo") in non-hospital settings. In fact, a study of a Finnish population demonstrated that one-fifth of the individuals carrying MRSA had no connection at all to a healthcare facility within the past 2 years (did not work there or had not come into contact with a hospital employee, had not visited a hospital, was not a recent patient).  According to the CDC, approximately 2% of us carry MRSA at any given time.

3. Individuals contaminated with MRSA by a person associated with a healthcare facility, and

The first three categories tend to produce strains that are multi-drug resistant, that is, they are not killed by several classes of antibiotics. These strains have survived multiple exposures to antibiotics (see graphic above) and have therefore produced strains that have mutations that protect them from a variety of antibiotics.

The final category, those strains of MRSA that arise all on their own in the community, generally only resists one class of antibiotics. (Whew.)

The most common result of CA-MRSA is a skin infection. According to the Mayo Clinic, symptoms begin as small red bumps which turn into larger, more painful absecess requiring medical draining. While most of the time the infection remains on the skin, given the opportunity, the Staph bacteria can invade deeper into the body, causing damage to bones, joints, the bloodstream, and even the heart and lungs. The Mayo Clinic suggests seeking medical treatment for all skin infections (pain and inflammation, visible signs of pus). They also urge you to not attempt to treat MRSA on your own, as it may cause further damage to you or your loved one as well as contaminate others.

Who is at risk of contracting CA-MRSA?

For most of us, CA-MRSA is not a great threat. Most of our infections will be quickly remedied with antiseptics or antibiotics. However, there are certain individuals who should pay extra attention to any infection, as their exposure to CA-MRSA is statistically higher.

1. If you engage in contact sports or recreational activities with others that have some risk for skin breakage, you should be vigilant about infections. CA-MRSA spreads through skin-to-skin contact.

2. If you live or work in crowded or unsanitary conditions, your chance of contact with CA-MRSA is higher. This does not mean squalid conditions, either; crowded conditions include military training camps, child care centers, jails, and other high-density environments.

Our final word about community-acquired MRSA involves the role of overuse of antibiotics. According to the Mayo Clinic, "MRSA is the result of decades of often unnecessary antibiotic use." Because antibiotics were so revolutionary at their introduction, they were used even when the illness did not call for antibiotics (colds, flu, and other viruses). Each time an antibiotic is used, some germs survive and pass on that resistance. And at the rate that bacteria reproduce, this means quick and efficient resistance. We can all be antibiotic stewards by following our doctor's recommendations regarding taking an antibiotic, as well as finishing the entire dose as directed.