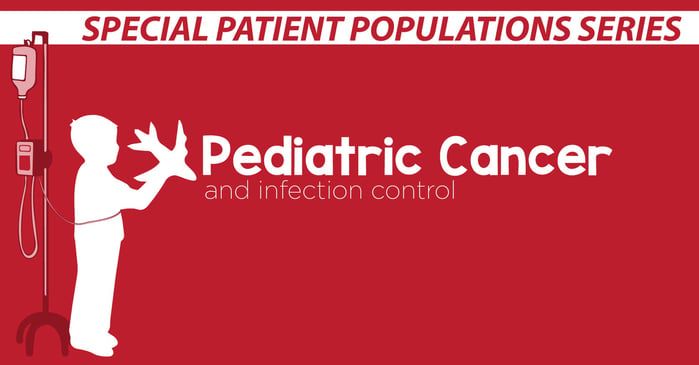 With a few words, a family's life is forever changed: "It's cancer." For any patient, these words bring anxiety and fear. When that patient is a child, however, no words can express the emotions that send shock waves through a family, friends, and community. Today's post begins a three-part story of one such young patient, a little boy named Jack. (Best of all, Jack's story has a happy ending.) During Childhood Cancer Awareness Month join us as we see the challenges of pediatric cancer treatment and infection control through the eyes of a boy and his mother.

First, a look at pediatric cancer. While rare, cancer accounts for the most deaths by disease past infancy in our country. It is estimated that over 15,000 children under the age of 19 will be diagnosed with cancer each year, and that the disease will claim the lives of almost 2,000. In good news, the most common childhood cancer, leukemia, is also the most successfully treated, and overall survival rates are improving for all oncology (cancer) patients.

Second, let's consider pediatric cancer and hospital-associated infections (HAI). Unfortunately, the data available for tracking HAIs in pediatric oncology patients is limited. One robust study, however, revealed that there is a significantly elevated risk of HAIs in children receiving cancer treatments. The majority of those HAIs are blood stream infections contracted through a central line, a permanent port placed in the body to allow for IVs, blood draws, and nutrition. This result is not necessarily surprising, since children undergoing cancer treatments are more susceptible to infection due to being neutropenic, that is, having low white blood cell counts. However, one important detail revealed by this study was that these children were at greater risk of contracting an HAI whether or not they were neutropenic. This is to say, their risk was not associated with their ability to fight off infections, but rather, due simply to exposure.

Finally, let's look at the two ways that an HAI can threaten the life of a child undergoing cancer treatment.

Any infection in an immunocompromised patient is dangerous. A weak immune system may not be able to fight off the infection, and the use of antibiotics may lead to complications of their own, such as C. difficile. Infection can further weaken a body already enduring harsh chemotherapy or radiation, leading to dehydration and even organ failure. What would be a harmless infection to a healthy child could be fatal for a child with cancer.

Treating cancer is a fight against time, especially with fast-growing tumors. Treatment in some cases is a schedule of aggressive chemotherapy cycles on a timeline set to kill cancer cells faster than they can regrow. Between each cycle are a few days for recovery and rest, carefully doled out but not drawn out, all in an effort to begin killing cancer cells again during the next cycle. Before a new cycle can begin, however, the patient must have a certain blood count, the right liver enzymes, and any number of other health requirements. Any infection means a delay in starting the next cycle, initiating a series of health events that could derail treatment and ultimately claim the life of the child. Keep in mind that cancer treatment takes place in stages, depending on the cancer type. There may be cycles of chemotherapy followed by surgery followed by rounds of radiation followed by transplants. An infection at any point of that schedule means the cancer has a chance to grow unchecked.

Our focus on the special population of cancer patients emphasizes the two health challenges they face: The cancer as well as the threat of infection. Our next post on the topic will introduce Jack, his mother and the three-year battle they waged against both cancer and infection. You'll see how a combination of a mother's vigilance and hope helped keep the two specters of infection - sickness and delay - far away so that medical therapy could remove cancer from a little boy. Stay with us!

Editor's Note: This post was originally published in January 2017 and has been updated for freshness, accuracy and comprehensiveness.