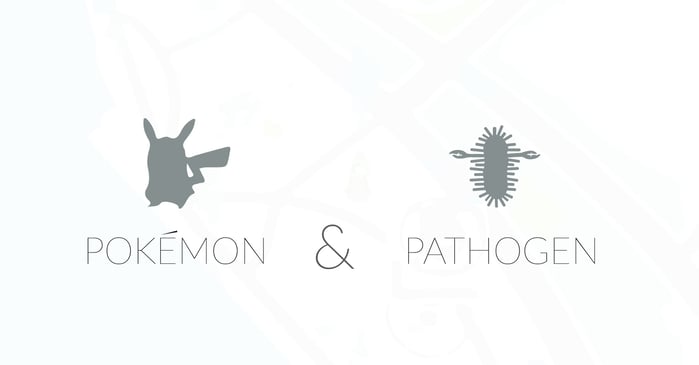 An inescapable phenomenon has infected our nation’s population. Within weeks of the first cases, it has spread to millions, leaving victims walking the streets like zombies, eyes glazed over, chasing what appear to be apparitions or hallucinations. On street corners after sunset they gather together in clusters, as-of-yet uninfected onlookers staring in curiosity – and barely concealed horror. What is this virulent pathogen that is ravaging our neighborhoods, our marriages, our workplaces? It’s Pokémon Go.

This phone-based game that has broken records for downloads, profits, and active users happens to be a fascinating analog to the way humans and microorganisms live together. Come along with us as we explore how Pokémon and pathogens meet.

In the Pokémon universe, players take on the role of Trainers who catch free-roaming creatures, called Pokémon, and train them to fight each other to win championships. The name Pokémon, a kind of abbreviation for “Pocket Monsters,” was conceived by game designer Satoshi Tajiri, whose childhood hobby was collecting insects, lending his naturalist approach to a game featuring the discovery and cataloging unique creatures. A common refrain describing the many incarnations of Pokémon, from video game to a television series, is “Gotta catch ‘em all!” While in the world of microbiology one most certainly does not want to catch ‘em all, many of the ideas captured in this game universe apply to ours.

Let’s start with the Pokémon themselves. Each creature has a Type, a kind of family that shares a habitat or supernatural existence. For microorganisms, this would apply to our idea of a species or genus of bacteria. Strains in the same species or genus share key characteristics, many of which can be exploited when creating antibiotics.

How does this new incarnation of the game serves as an analogy to our struggle with healthcare-associated infections? In Pokémon Go, players walk around their neighborhoods, parks, city centers, and even at work, waiting for the GPS-connected game to reveal a Pokémon, which they must try to catch. Just like our everyday exposure to disease-causing pathogens, these Pokémon appear relatively infrequently and unpredictably. In the game, there are places where Pokémon appear with greater regularity, and there are even some ways to lure Pokémon to the player, who can then catch them, much to their delight. In the real world, this is very similar to hospital-acquired infections. Hospitals, by their very nature, “lure” patients hosting a variety of microorganisms, while at the same time treating patients who have weakened immune systems or vulnerable entry points for these pathogens. This creates a zone where more microorganisms have a chance to be caught – in this case, to our great detriment.

Finally, the ultimate point of Pokémon Go serves as an analogy to the most dangerous aspect of HAIs. In the game, the trainer’s goal is to win a championship by having the most powerful, most evolved Pokémon. Through fighting with other Pokémon, each creature gains points. Additionally, the trainer must choose when to supply the Pokémon with special ingredients to help the creature become more powerful and thereby evolve. If the trainer happens to catch a rare Pokémon, or is able to evolve a creature to have unique and powerful skills, then that creature can quickly rise to the top of any challenge as the champion. The corresponding scenario in our hospitals is not so pleasant. In the case of pathogens, microorganisms battle it out with other microorganisms, antibiotics, and other conditions and those that win, survive. Those surviving microorganisms become “superbugs,” organisms capable of resisting many or all antibiotics, and with the ability to survive on surfaces and devices for long periods of time. Evolution enables the genetic material the gives the bacteria antibiotic resistance to pass on to future generations, and in some cases, pass on to neighboring microorganisms. The resulting champions of these battles cause thousands of deaths each year, and are only getting stronger. 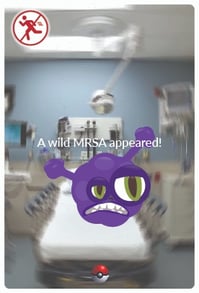 Unfortunately, there are many aspects of Pokémon Go that are not analogous to our fight against HAIs. We seldom get any advance notice that a pathogen is present in our environment. We don’t have immediate access to each pathogen’s unique abilities, virulence, or weaknesses. We can’t choose to catch it or not. We can’t decide to run away if the pathogen proves too difficult to handle.

However, we are not fighting HAIs alone. With Valor, Instinct and even a little Mystic inspiration, researchers, policymakers, advocates and manufacturers are all working together to reduce hospital-acquired infections so that patients no longer face the danger of catching a pathogen while receiving medical care.