How do Germs Spread?

Germ theory, the idea that infection is caused by microscopic organisms unseen to the naked eye, is only a few hundred years old. This theory focuses on three main components.

But the paths from the reservoir to the susceptible host seem infinite. To narrow down the steps needed to prove this relationship between contaminated rooms and infected patients, researchers have proposed routes of transmission that could account for a relationship. Here are two proposals, both of which demonstrate the critical role played by surfaces in the transmission of pathogens.

Researchers Rutala and Weber proposed these routes based on findings with Clostridium difficile, commonly known as C. diff. Rutala's proposal, Model 1, has three interconnected paths starting from the "infection reservoir."  This reservoir can be animate (living = a person) or inanimate (nonliving = a thing). Route A shows how infection can start at the reservoir and be transmitted to an inanimate surface (device, over bed table), where it is picked up by a vehicle (water, air, soil, insects), and from there directly to the susceptible host. In Route B, instead of an inanimate object, the pathogen is first picked up by a healthcare worker who carries it to the susceptible patient. Finally, Route C demonstrates how the pathogen can be transferred from a person to an inanimate surface (where it survives for hours to even months), and is later picked up by another person, who brings it to the patient. Rutala's model also shows how this transmission can be interrupted through cleaning hands and surfaces. 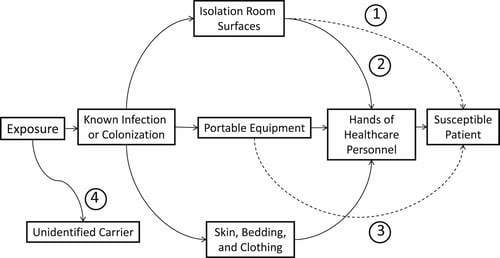 Donskey proposes Model 2 for the routes of transmission of pathogens found in healthcare environments, also based on findings with C. diff. In this model, the reservoir begins with the infected patient shedding pathogens into the environment. These pathogens land either on room surfaces, portable equipment, or the patient's own skin, bedding, and clothing. Donskey proposes that pathogens can be transmitted directly to susceptible patients or indirectly via the hands of healthcare personnel. A fourth option is included to account for transmissions to unidentified carriers - those individuals who do not show symptoms while carrying the pathogen on their body. As with the Rutala and Weber model, Donskey explains how the transmission can be interrupted through use of effective cleaning protocols.

These two options both agree on two key elements: Surfaces in the patient room play a critical role in allowing the transmission of infectious pathogens, and the routes of transmission can be interrupted through cleaning. Empowered with this knowledge, healthcare workers, advocates, and patients themselves can work towards decreasing infections by reducing the bioburden surrounding vulnerable patients.