The Newest Superbug to Reach the US: The Final Threshold Crossed? 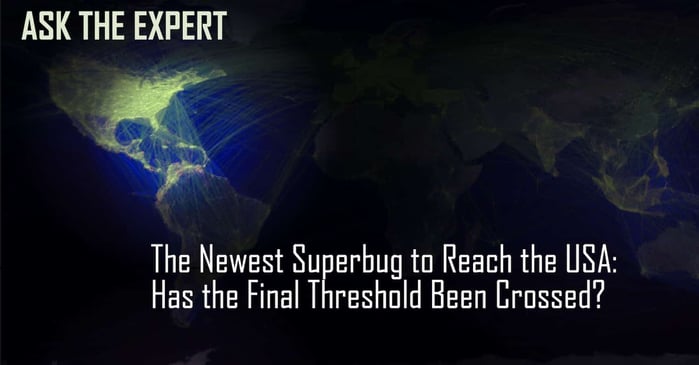 How did we cross that threshold?

Colistin is a complex polypetide antibiotic in the polymixin class of antibiotics. This means it is a mix of two rings of biologically occurring amino acids.

As an antibiotic, colistin declined in clinical use in the 1970s as other antibiotics with less toxicity (especially renal and neurological) became available. However, colistin was reintroduced to treat multi-drug resistant bacteria in the 2000s.

The reintroduction of Colistin has led researchers to scrutinize thousands of historic samples, as well as to set up routine screening programs in order to find examples of resistance to colistin due its specialized nature in being one of the few antibiotics left to fight multi-drug resistance bacteria.

Where else in the world has this been found?

One of the screening programs conducted around the world is responsible for locating the most current strain, found in a 49-year-old women seeking treatment for a urinary tract infectioni. The screening program of the Walter Reed National Military Medical Center (only established in May 2016) detected the colistin resistant E. coli after the isolate was sent to the center from Pennsylvania due to its unusual nature.

In addition to this most recent isolate, colistin resistance was noted in E. coli in 2015 from both animals and humans and in Klebsiella pneumoniae from humans by a screening program in China[ii]. More worryingly, the mobile DNA for colistin resistance was shown to be able to move between bacterial species-not just to “offspring” but also other relatives (horizontal gene transfer: like if you could pass your gene for eye color to a friend by shaking hands).

How did we get here?

No, not yet. Yes, the colistin resistance gene has been found in numerous bacterial species and on different mobile genetic elements, and has reportedly been able to be transferred between species with high efficiency. However, to date, the colistin gene has not been found on the same mobile DNA elements that CRE bacteria typically carry that confer broad antibiotic resistance. Added to this, while CRA can have a devastating impact (up to 50% mortality in some cases) the rate of CRE organisms are very low (around 600 deaths a year), and the incidence of CRE, while present in most states, is not particularly high[xviii] and typically confined to patients in hospitals or nursing homes.

What can we do about it?

There is a lot of focus around this issue currently and collectively action is all ready underway;

The problem of antibiotic resistance is not going to go away, and ultimately this is a story 70 years in the making. There is not a single answer. But collective action by the consumer, medical professionals, regulators, governments and research scientists is required to stop this looming threat.

Dr. Monk is the Director for Clinical and Scientific Affairs for Cupron Inc, a biotech firm based in the Richmond , VA area focusing on utilizing its novel proprietary platform technology involving the use of copper compounds in synthetic polymers for consumer, medical, industrial and military applications. Dr. Monk’s area of expertise is microbiology and antimicrobial’s mode of action and resistance, and he is responsible for managing clinical and research trials in the United States, and executing regulatory strategy in the United States for Cupron Inc.  Prior to joining Cupron, Dr. Monk was Head Scientist at Biocontrol Ltd developing novel antibacterial solutions for antibiotic resistant bacteria.  Dr. Monk received his PhD in Microbiology and Molecular Epidemiology from Bath University and B.Sc. in Biology and Microbiology from the University of Birmingham.  Dr. Monk performed his post doctoral studies at Virginia Commonwealth University focused on antimicrobial’s mode of action and resistance.