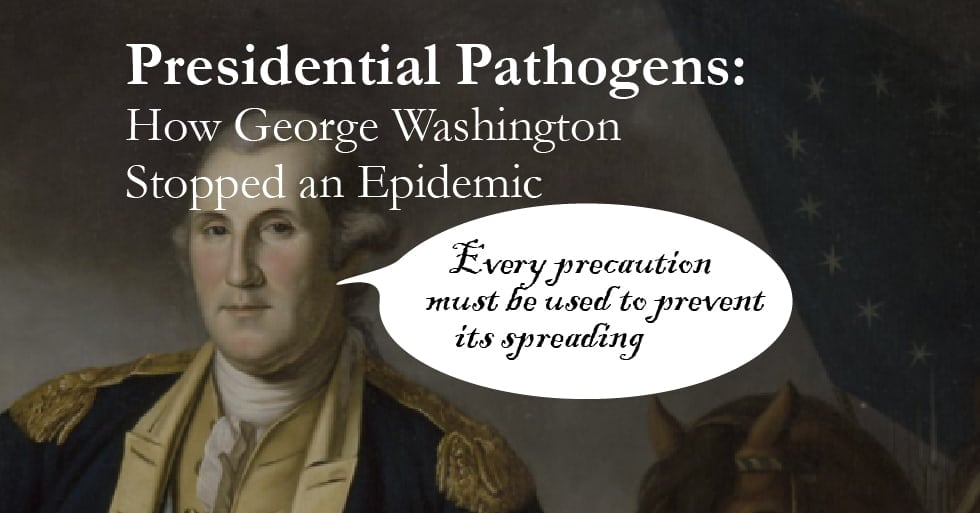 With a Presidential Inauguration taking place in the midst of a global pandemic, we have the opportunity to look at how past president's have dealt with pathogen outbreaks. Pre-antibiotic presidents faced illnesses in their personal lives alongside their fellow Americans, often with tragic results. Once vaccines were available, presidents often took leading roles to promote their use, both through public statements and through policy. But it was the very first president who actually took first-hand steps to stop an epidemic, steps that may have allowed for the very birth of our nation.

Long before he became president, George Washington took a tour of Barbados with his half-brother, Laurence. Both become gravely ill with smallpox, then endemic to the tropical island. Sadly, Laurence succumbed to the disease. George, on the other had, survived, gaining life-long immunity (thanks to antibodies that remained in his body).

Decades later, while fighting in the American Revolution, smallpox reached the shores of the colonies. While most British soldiers already had been exposed to the virus and gained immunity, most Americans had not. As a result, smallpox swept through the ranks of soldiers, killing thousands of men, in excess even of those dying on the battlefield. For this reason, General Washington referred to smallpox as "this most dangerous enemy," which might wipe out the Revolutionary Army before they even had a chance to fight.

Recalling his personal experience and listening to the advice of contemporary physicians, Washington urged the Virginia legislature to require inoculations of all troops.The legislators knew that inoculations through variolation, in which an individual is exposed to a mild infection in order to build up antibodies, could result in mild sickness that lasted up to two weeks. Worried that the inoculations would slow the progress of the army, the Virginia legislature refused.

Meanwhile, Washington was fighting a similar battle in his personal life. His wife, Martha, was eager to join him in the North, but refused to take the inoculation that her husband insisted upon. He did not want her to join him, only to be felled by a disease. Through letters, we know he worked hard to convince her of the safety of the inoculation, giving her comfort where she felt anxiety and fear. In a letter to his brother John Augustine, he wrote that "Mrs. Washington is still [at Mount Vernon], and talks of taking the Small Pox, but I doubt her resolution." In order to not be separated from her husband, Martha ultimately overcame her fear, received the inoculation, and joined George in New York.

On the battlefront, General Washington put aside the decision of the legislature and required compulsory inoculations of all his troops. As a result, deaths due to smallpox dropped 17% immediately, and down to 1% by the end of the war. His embrace of the benefits of inoculation and trust in science not only saved lives, it saved the Revolution. George Washington's enemy may have been the British, but he had to defeat smallpox first.

In many ways, we are fighting a similar battle today. A vaccine is now available for COVID-19, and yet, not everyone is onboard with taking it. Some want to wait and see, others don't trust the outcomes, while others question whether it's even necessary. However, if we want to win the bigger battles - healing the economy, re-opening businesses, and returning to normal - we should listen to George Washington and "take every precaution" to end this pandemic.