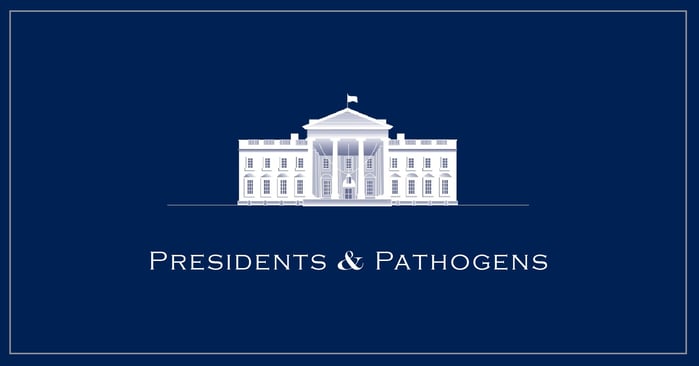 Less than a century ago, in a world without antibiotics and limited treatments for infections, the leading causes of death were infections - pneumonia or flu, followed closely by tuberculosis and gastrointestinal infections. Everyone knew someone who had died from one of these infections, and most families had experienced the tragedy of losing at least one young child to infection. No one was spared this very human experience, not even United States presidents. In today's post, as we learn about how pathogens impacted the lives of our presidents, we'll get a better picture of just how pernicious infections were just a short time ago.

The first century of life in the United States was hard for every-day citizens. Alongside having to build communities from the ground up, and managing the political upheaval of revolution and territory fights, our predecessors had to live with the constant presence of disease. Waves of cholera, influenza, smallpox, yellow fever, and any number of infections would spread through communities of all sizes, affecting all of our past presidents to some degree.

A persistent bacterial infection of the lungs that can kill right away or take years to claim a life, was a constant threat. Tuberculosis claimed the life of George Washington's brother, Martin Van Buren's wife, two of Abraham Lincoln's sons, Andrew Johnson's wife, and Benjamin Harrison's and Woodrow Wilson's wives while they were First Ladies. Even a more contemporary president, Richard Nixon, lost two brothers to tuberculosis.

A tropical disease transmitted through infected mosquitoes, was endemic in the United States until the 1950s. Early presidents, such as George Washington, James Monroe, and Andrew Jackson, contracted the disease while traveling in what would one day be known as Barbados, Mississippi and Florida. But malaria was not restricted to just the warmer, southern territories. Abraham Lincoln contracted malaria in Illinois, and a young James Garfield became sick with malaria in Ohio - his First Lady would later get malaria while living in the White House.

A bacterial infection transmitted through contaminated water, swept through cities in the United States with devastating regularity. Andrew Jackson's mother succumbed to cholera, as did Millard Fillmore's daughter. During a post-presidency tour of the Southern States, James Polk contracted a fatal case of cholera, dying just a month after leaving office. A year later, his successor, Zachary Taylor, also became ill with cholera and died from the disease while still in office.

A body's overreaction to infection, was a common cause of death in an individual with a wound or incision. It was because of sepsis that, of the four presidents who were assassinated by gunshot, two died not from the attack but rather from the subsequent infection. James Garfield, wounded just four months into his presidency, might have survived had his doctors not continued to probe his wound with unwashed, ungloved fingers. Just two decades later, a similar fate awaited President McKinley, when gangrene set in at the site where surgeons had attempted to remove the bullet, leading to his death a week later. In another heartbreaking example, Calvin Coolidge's son died from sepsis after a blister he acquired while playing tennis at the White house became infected.

A catch-all diagnosis for gastro-intestinal infections, could cause dangerous dehydration and even death.  Crowded conditions, such as soldier encampments, were particularly rife with the disease. Washington, DC, a city built upon a swamp and with very little infrastructure to handle a rapidly growing population, became a filthy, disease-ridden city. A central figure in this mess was the Washington Canal, a shallow waterway intended for commercial barges, that instead became a massive open sewer where people dumped trash and where all the city's foul water emptied. It is no surprise that during this time period, many presidents and other elected officials contracted gastrointestinal infections. In one famous case, President James Buchanan became ill along with hundreds of others at the National Hotel, an outbreak that killed his favorite nephew and many other prominent officials.

Acceptance of the germ theory of disease, the subsequent antiseptic practices, and finally the discovery of antibiotics meant a radical reduction in these diseases throughout the United States. Thankfully, individuals and their families in our country do not have to worry about outbreaks of cholera, diphtheria, yellow fever, malaria, mumps, measles, scarlet fever, smallpox, typhoid, typhus, or any of the other terrifying infections that plagued our past presidents. And even on the rare occasion that a dangerous infection does affect someone - as with President Obama's daughter, who survived a dangerous meningitis infection as an infant - we have ways to treat the disease.

This President's Day, let's take a moment to remember that for most of our country's history, infection was an inescapable threat that spared no one, regardless of position or background. Thankfully, today we have antibiotics and vaccines that have made this inevitability a thing of the past. Let's make sure we don't go back to those dark times by working together to support antibiotic stewardship and vaccine participation!