Hurricane Epidemiology: Dangers After The Storm 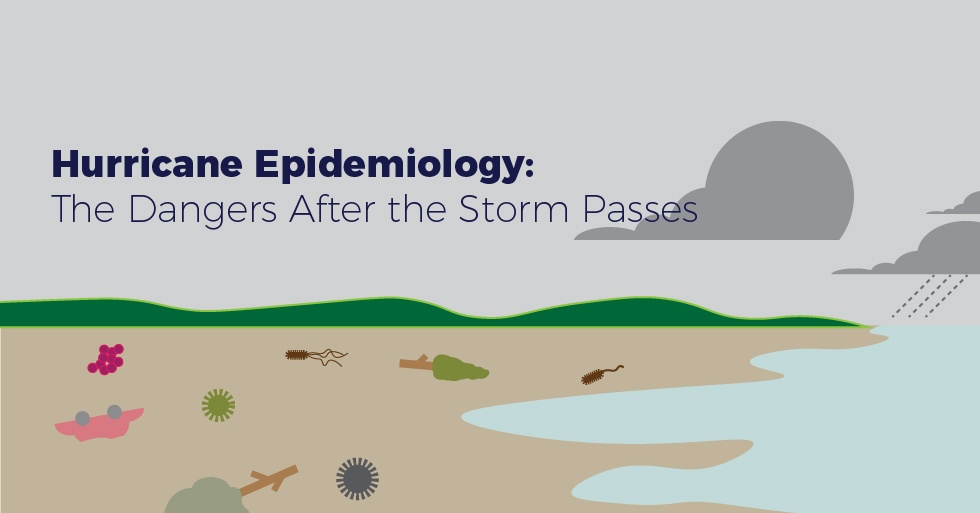 This past week saw a devastating hurricane barrel into the United States. Hurricane Ian, which began as a tropical wave east of the Winward Islands, attained Category 4 designation as it reached the Gulf Coast of Florida. As it plowed across Central Florida, it brought sustained winds of 145 mph at the coast and 85 mph even as it reached the Atlantic Ocean two days later.  As with all hurricanes of this magnitude, the dangers to life and limb are not limited to the duration of the actual storm- the weeks that follow bring a whole new set of dangerous conditions. Today's post will explore the dangers that involve infectious disease and the overall access to medical care.

Whenever there is a cataclysmic weather event such as these recent hurricanes, news coverage includes the sobering statistic of deaths claimed by the storm. After the 24-hour news coverage stops, however, these storms continue to claim lives. While they may not make the nightly news, these fatalities and injuries - from lack of access to health care to an infectious disease - are directly related to the storm.

The first category of post-storm dangers comes from the water. Standing water, often several feet deep, serves as a perfect breeding ground for any number of waterborne pathogens. Often, sewage systems will be compromised, spewing human waste full of bacteria into the floodwaters. If Katrina serves as a model, cases of MRSA, Vibrio pathogens and E. coli will be the most likely culprits, leading to GI issues, skin rashes, and upper-respiratory infections. (Vibrio pathogens? Yes, that includes the toxigenic strains of cholera. However, the cases following Katrina were other members of the Vibrio family. For the toxigenic strain to become a problem, a person with that disease would have to be present in the area already. Thankfully, cases of toxigenic cholera are extraordinarily rare in the United States - under 5 cases per year.) Mosquitos tend to increase after extensive flooding, providing a vector for numerous diseases. But it turns out the organisms of greatest risk to humans after a hurricane are... other humans.

The second category involves outbreaks in the close quarters of hurricane shelters. In particular, "mega-shelters" housing thousands of evacuees pose significant dangers for the transmission of disease, especially norovirus, and of course, SARS-CoV-2, the virus that causes COVID-19. In a "perfect storm" of risks, these mega-shelters involve lots of people, limited access to showering and cleaning supplies, shared bathrooms, spoiling food, and tight quarters. In these conditions, a viral infection can quickly become an outbreak.

After a storm, access to medical care is often limited. Roads may be impassible, phone lines overburdened, and facilities (including pharmacies) might even have to be shut down. Just before Hurricane Ian hit, 16 Florida hospitals evacuated critical patients to other facilities, but several evacuations took place in Tampa Bay, where the hurricane was expected to hit, rather than in Fort Myers, where the greatest impact was felt. At least 9 hospitals are without water, resulting in the evacuation of over 1,000 patients. Florida Fawcett Hospital made global news when part of its roof was ripped off by high winds; at that facility, staff moved patients to other floors while more permanent placements could be made.

Access to prescription medications can also be a challenge. From lessons learned during Katrina, several preventive measures were in place to stockpile medications in hurricane-prone areas throughout Florida. These include medications needed for chronic conditions such as diabetes, but access to medications such as antibiotics and simple first-aid supplies will be out of reach to some evacuees for a time after storms of this magnitude.

Finally, after evacuees are cleared to return to their homes and cities start to rebuild, there is one more significant danger to face: Mold. Homes, businesses, and any other structure in the flooded areas will be waterlogged, creating an environment perfect for the quick growth and spread of mold. Spending time cleaning and rebuilding around mold has been linked to respiratory symptoms, allergies, asthma, and immunological reactions. After every major storm, including Katrina in New Orleans and Sandy in New York, mold posed a significant health threat for months and even years after the storm. The most dangerous type is known as "toxic mold," strains of mold that have developed toxigenic mycotoxins that can make anyone who inhales them sick. Ridding structures of any kind of mold infestation - toxic or otherwise - is expensive, time-consuming, and often not successful.

In a world where we are outnumbered by bacteria and other microscopic pathogens, we have to constantly work at keeping unwanted microorganisms in check. After a major disaster, however, those day-to-day efforts such as refrigeration, personal hygiene, and medical care are disrupted. And it's not just hurricanes - earthquakes, such as the one in Mexico last month, and any number of disasters can have the same effect. These opportunistic pests will take advantage of this chink in our armor, so we have to be prepared to fight back.

On behalf of everyone at EOS, we send our hopes and prayers to those affected by Hurricane Ian.