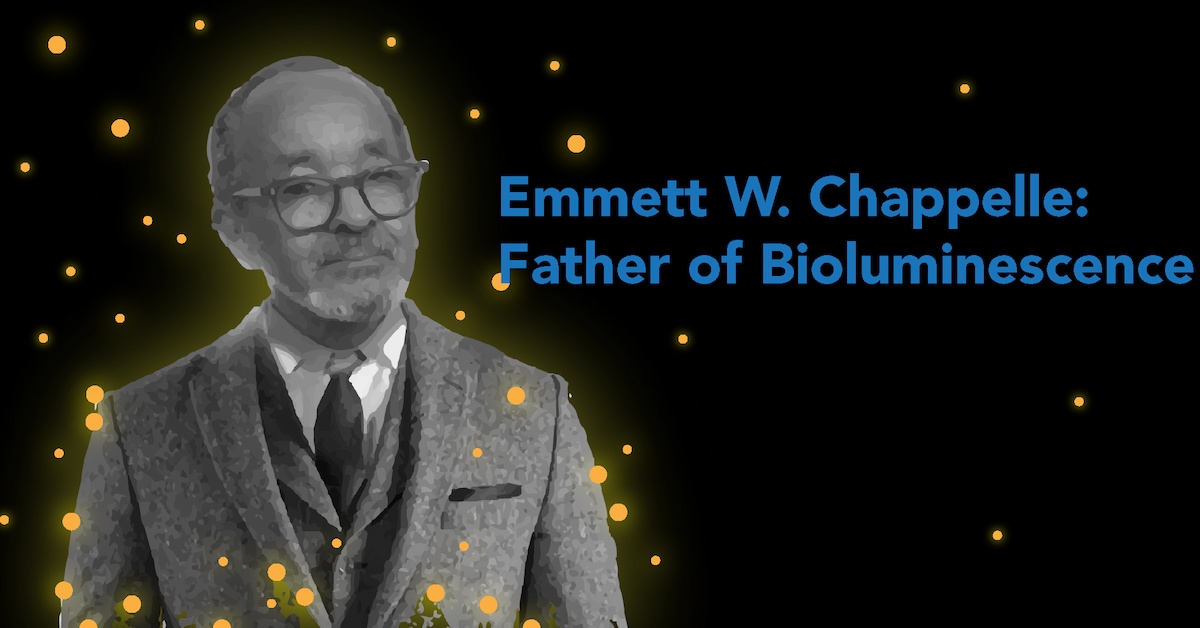 In a Baltimore, MD laboratory in the 1970s, a researcher made a discovery that would revolutionize our ability to detect the presence of microscopic organisms. From this one discovery, this scientist would invent ways to test soil on Mars for evidence of life as well as evaluate bacteria for antibiotic susceptibility. This one tenacious biochemist would go on to invent uses of bioluminescence that would affect almost every industry, from space exploration to food production to medicine. This man was Emmett W. Chappelle.

Emmett was born into a farming family outside of Phoenix, Arizona. While his mother and father grew cotton and raised cattle, Emmett would explore the desert landscape hunting for interesting plants, insects, and fossils. His curiosity and intelligence would continue as he grew up, earning the top position in his high school senior class. Right after graduation, young Mr. Chappelle was drafted into the army, where he was stationed in Italy for the duration of WWII. It was during his service in the army that he was finally able to put his engineering talents to use, as well as pursue advanced training that, due to segregation and intense racial inequality, was not available to him stateside.

Upon his return from serving his country, Mr. Chappelle completed his bachelor's degree in biochemistry (UC-Berkley) and master's degree in biology (U. of Washington), all the while working as an instructor and research associate at various institutions. He was then appointed as a researcher in biochemistry at the prestigious Research Institute of Advanced Studies at Stanford University, where he began, but never completed, his doctoral studies.

Mr. Chappelle was in many ways an inventor at heart - he loved creating practical and effective tools to advance research. This engineering mentality landed him a position with an aerospace company, which then led to a design position with NASA-Goddard Space Center, where he focused on manned space flights.

It was during his time at NASA-Goddard that Mr. Chappelle discovered that all living cells are capable of bioluminescence in the presence of a chemical combination found in fireflies, luciferase. Immediately seeing the potential of this chemical reaction (called a lyophilized reaction), Mr. Chappelle began to focus on the applications of this reaction. This focus and tenacity would become the theme of his work - and in some ways - his home life as well. Remembering this period of her father's work, Mr. Chappelle's daughter, Carlotta, stated, "There was one summer when he paid a penny for each firefly we caught. There was many an evening when all the neighborhood kids were out with their jars catching fireflies.” Little did Carlotta, or her brothers and sisters know, their fireflies would connect them to discoveries on the surface of Mars.

Seeing the many applications of his discovery, Mr. Chappelle first designed a test that would be able to detect the presence of living organisms in soil samples, even if those samples are millions of miles away on the surface of Mars. Mr. Chappelle worked to bring this technology to the Viking probe on Mars, and even to the development of water quality tests on the International Space Station. But the applications did not stop there.

Mr. Chappelle's further work in the field of lyophilized reaction mixtures included inventions that had an enormous impact on the medical field. One such invention used the same scientific foundation to detect the presence of bacteria in blood or urine samples, giving medical staff a quick way to test for infection while giving valuable time for treatment to the patient. Even laboratory medical science was improved by Mr. Chappelle's inventions: He designed ways to use this chemical reaction to help test bacteria strains for antibiotic susceptibility, allowing physicians a quicker way to decide which antibiotic to prescribe for a specific pathogen strain. And everyone in the infection control and prevention field knows about ATP monitors - scanning equipment used to detect organic contamination on hospital surfaces - an example of Mr. Chappelle's genius that you can hold in hand.

Mr. Chappelle's discovery of lyophilized reaction mixtures led to true scientific innovations thanks to his ability to not only recognize the chemical reaction, but also make the leap necessary to see the myriad of ways that reaction could be put to good use across a variety of fields. Often, a chemical process will be discovered by one scientist, while taking many other scientists to see applications for that discovery, and yet even others to create practical tools using that discovery. Mr. Chappelle was one of those rare geniuses who could take a discovery all the way from theory to application. For his contributions, Mr. Chappelle received the Exceptional Scientific Achievement Medal from NASA and was inducted into the National Inventors Hall of Fame in 2007. Mr. Chappelle retired in 2001, but continued his work as a mentor and collaborator on numerous projects up until his death in 2019. Unlike the fireflies whose lantern chemicals blink on and off in summer skies, Mr. Chappelle's legacy will shine for decades to come.