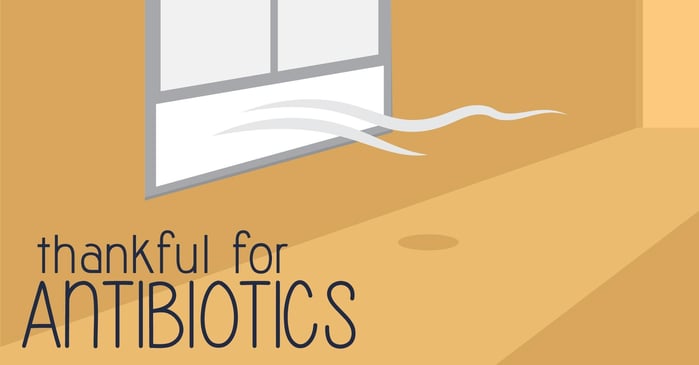 This story is probably familiar to most of us. We enjoy hearing about scientific discoveries, but those that come from accidents and chance are particularly intriguing – what if the window hadn’t been left open? What if young Dr. Flemming had just tossed his contaminated culture? It’s easy for us to believe that luck opened the door to an incredible discovery and that the scientist just had to walk through to the accolades of his colleagues and the world. But no scientific discovery is so easy. Consider that this mote of Penicillium notatum fell on Flemming’s dish in 1928, but the first mass use of penicillin to cure infections was not until 1945. What took so long?

Determination, persistence, and generosity propelled an accidental discovery to a life-saving miracle drug. Flemming knew that the toxin released by the mold was killing bacteria, but for it to become a medicine, that toxin had to be isolated, purified, tested, and mass-produced. Knowing he could not do it alone, Flemming doggedly promoted the need for researchers to attack this problem. If they needed strains of the rare mold, he sent it to them. For 12 years he worked tirelessly to find a way to translate the biocidal properties of Penicillium notatum to pharmaceutical use. With no promising results, he even almost abandoned the idea entirely in 1940, when a team who had received one of his mold samples announced that they had found a way to purify the toxin enough for clinical trials. It was their subsequent work that would bring the first antibiotic to the world.

It took an additional five years, but finally the results were conclusive: Penicillin could cure a broad spectrum of infections caused by bacteria. But the original mold species, Penicillin notatum, just didn’t create enough of the toxin. It was difficult to culture and slow-growing. It did not produce toxin quickly. The scientists who had discovered the way to isolate the toxin, Drs. Howard Florey, Ernst Chain, and Norman Heatley, knew that another mold may provide a faster, more productive source of the same toxin. Heatley, who was already trying to grow as much penicillin as he could in any container he could find (including bed pans!), flew to the United States with Florey to begin intensive work in mass production. They called for samples of every and any mold to be sent to their lab in Peoria, Illinois to be tested for bactericidal properties. Samples came in from around the world, each tested against bacteria using techniques perfected by Flemming. But it was a sample from down the street that propelled us into the antibiotic age.

When a lab assistant brought in a cantaloupe she had bought at a local market with a “pretty, golden mold,” it was tested along with the samples from around the world. As luck would have it, this strain of Penicillin proved to yield 200 times the amount of the chemical produced by the original strain found by Flemming. With enhancements from the genetic mutation techniques of the day (X-rays and filtration), the team was able to increase the yield to 1000x the original amount. Finally, the production met the dosing requirements for clinical tests.

World War II would prove the miracle of this wonder drug. The casualties of war up until this point had been mostly due to infections, not directly the result of the battlefield. Even World War I, with more advanced medical care than ever before, saw 18 percent of deaths due to bacterial pneumonia alone. With hundreds of thousands of doses distributed to help American soldiers during WWII, that number fell to less than 1 percent. Soon after the war, production of life-saving doses reached the billions.

While Alexander Flemming played a vital role in starting the search for this first antibiotic, the dedication and creativity of Florey, Chain and Heatley played just as great a role. The Nobel Prize committee agreed, awarding the 1946 Nobel Prize in Physiology or Medicine to all but Heatley. (Heatley would later be recognized by the first honorary doctorate of medicine in its 800-year history by Oxford University.) Not just the discovery, but the decades of tireless and often unrecognized work, helped bring us the first antibiotic.

During Flemming’s Nobel speech, he reflected on the effort of so many to develop a drug that revolutionized medicine and humanity. But he also warned us about nature’s ability to adapt, and that overuse of penicillin could lead to resistance. In fact, it would only be just over a decade from his speech that the first resistant plasmids (genetic loops that can transfer resistance) were discovered. While new antibiotic classes and types were found over the decades, no new class of antibiotics has been found since the 1970s. With increasing resistance and no new options, the return to the pre-antibiotic age is in fact a possibility.

There is one thing we can all do to show our thanks for antibiotics: Follow your doctor’s directions when given a prescription, including if he or she says you don’t need one. Remember, antibiotics do nothing for a viral infection. We may not remember a time before antibiotics, but we surely don’t want antibiotics to be only a memory to our children or grandchildren.