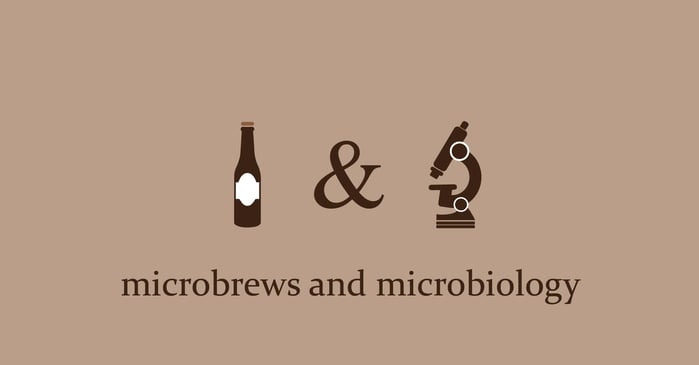 This blog has covered many aspects of microbiology, from germs that make us sick, to the bacteria that help us live. Today’s post explores microorganisms that are not vital to our survival, but perhaps make life a little livelier. Those microorganisms are the ones that bring us beer.

Humans have brewed beer for almost 10,000 years, possibly soon after the first cereals were farmed. Evidence of beer trade, brewing, and enjoyment can be found in archeological sites as well as in preserved writing from all over the world. Communities used whatever grain was cultivated, including rice, corn, and wheat. Popular not just for its taste and euphoric effects, beer also provided a safe alternative to contaminated water which could carry any number of fatal diseases. It just so happens that the contaminated water and beer shared one common ingredient: microorganisms.

When wet grains ferment, the sugars from the starch of the grain are converted into alcohol. The mechanism doing this conversion is yeast, a microorganism that, in the absence of air, breaks down the sugars into alcohol to use as energy. The most widely used strain of yeast used in the production of beer around the world is Saccharomyces cerevisiae. This yeast is thought to have been isolated from the skin of grape leaves by our ancestors, and became essential to the production of not only beer, but wine, bread, and other fermented foods.

For millennia, beer was brewed in homes or in small breweries in small batches. The industrial age allowed mass-production of the popular beverage to meet the needs of the growing population, a market which has continued to grow. Today beer represents a multi-billion dollar industry, a massive network of breweries, distributors and sellers that still relies on this humble yeast.

A resurgence in local beer production has re-introduced another microorganism into today’s beer: bacteria. Microbreweries, small-batch producers of unique beer flavors and styles, have brought age-old techniques back into practice. One of these practices is “wild-culture beer,” in which more than one strain of microorganism is used to ferment. Another is “open-air fermentation,” where fermentation takes place in an open barrel, allowing the air to waft in native microorganisms, including bacteria. There are two strains of bacteria that are most used in conjunction with the yeast S. cerevisiae (or in some instances, Brettanomyces) to ferment the grain.

The first of these bacteria is Lactobacillus, a bacteria that produces lactic acid from sugars, lowers the pH of the liquid, and makes the beer sour. In the beer world, this attribute would be described as “tang,” and lends its unique flavor to German beers such as Gose beer and Berliner weisse beer.

The second bacteria helper is Pediococcus, which also produces lactic acid. Its sourness is considered less “clean,’’ imbuing the beer with more aromas and flavors than Lactobacillus. It is often used in conjunction with the far-less-common Brettanomyces yeast to confer what beer brewers consider “funk,” earthy flavors that have been described as anything from “dirt” to “sweaty horse blanket.” Belgian lambics and Flanders reds are examples of beer produced with Pediococcus.

Beer represents yet another way that humans and microorganisms interact in ways that benefit us. Without knowing the biology or chemistry behind it, ancient brewers, bakers, and cooks were able to use yeasts and bacteria in creative and life-altering ways, including brewing a beverage that has become the third-most consumed drink after water and tea. Beer travelled with the pilgrims on the Mayflower and has been brewed in space, and it will continue to accompany the human race into the future, all made possible by humble microorganisms.