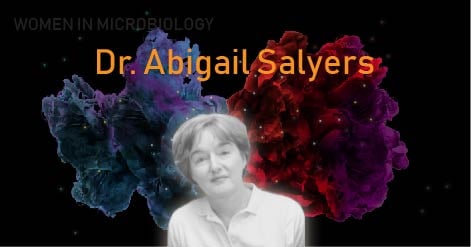 Radical. Unconventional. Irreverent. Dr. Abigail Salyers entered the field of microbiology as an outsider and ended up bringing the field into a new era with her insights, sense of humor, and endless dedication. It took someone with her outsider status to see microbiology in a new light- or rather, in darkness, as today's post will explore - and leave us with a legacy of discovery and leadership.

From Pregnant Teenager to Assistant Professor Dr. Salyers may not have started her life on a path that many would have thought would lead to breakthrough scientific discoveries and national leadership. At 17, in 1959, she was a pregnant senior facing expulsion from her Northern Virginia high school. Nevertheless, she enrolled at George Washington University, where she not only graduated with a BA in mathematics, she graduated with honors (Phi Beta Kappa) and went directly into a PhD program in Physics, earning her doctorate in 1969. At 27, she was a single mother to a 10-year-old, publishing papers in nuclear physics, and an assistant professor. Not bad.

From Physics Professor to Microbiology Lab Director Dr. Salyers, however, wasn't satisfied. As her daughter would later recall, "She didn't see a challenging, interesting, or appealing future in teaching physics." So she decided to move to a new university, take up a new teaching position, and start a new field of study, this time in microbiology. More specifically, what Salyers would call "the dark side" of the field: anaerobic microbiology. And not just any anaerobic organism became her focus - she chose Bacteroides species, then a nonmodel organism. After three years of study and teaching at Virginia Tech, she was snapped up by the Microbiology Department at the University of Illinois, where she set up her lab in 1978.

From Funny Bugs to Antibiotic Resistance Dr. Salyers dedicated her study to the microorganisms that live in the dark, anaerobic environment of the human gut. While everyone else seemed to be studying E. coli, she continued with Bacteroides, pushing the field to recognize the diversity of the microbiome and what it could teach us about human health. Specifically, her lab discovered that the way Bacteroides transferred genetic information about antibiotic resistance - and how that genetic information was regulated to spread resistance to surrounding bacteria. Dr. Salyers was among the first researchers to sound the alarm about growing antibiotic resistance and the need for stewardship.

From Leadership to Legacy While running her lab and teaching her students, Dr. Salyers always maintained an active leadership role in the field of microbiology. She brought her writing and vision talents to a new generation of microbiologists through her highly popular textbook, "Bacterial Pathogenesis: A Molecular Approach," which succeeded at introducing the material in an engaging and stimulating way. She brought her vision to the training of medical students through her work as codirector of the Microbial Diversity course at the Marine Biological Laboratory in Woods Hole, MA, where she completely reorganized the course and integrated the most up-to-date molecular approach into the curriculum. When she was elected the President of the American Society of Microbiology, she not only provided national support during the anthrax scare of the early 2000s, she also advocated for the rapidly expanding role of microbiology at the forefront of the biological sciences. She left a legacy of students, scientific discovery, and lasting expression of what she called "prokaryotic pride."

Dr. Salyers spent her life researching and promoting "funny bugs," microorganisms that were overlooked during the field's decades-long focus on "paradigm organisms." Because she strayed from the establishment organisms, she was able to discover new genetic insights, foresee the threat of antibiotic resistance, and promote the need for clinical and environmental microbiologists to collaborate more. Perhaps Salyers' unconventional beginnings and her "outsider" status enabled her to see the outsiders in the microbial world, the "funny bugs" that paved the way to groundbreaking discoveries. We are grateful for her persistence, her genius, and her continued legacy.