When A Pandemic Becomes Endemic: What Does That Mean? 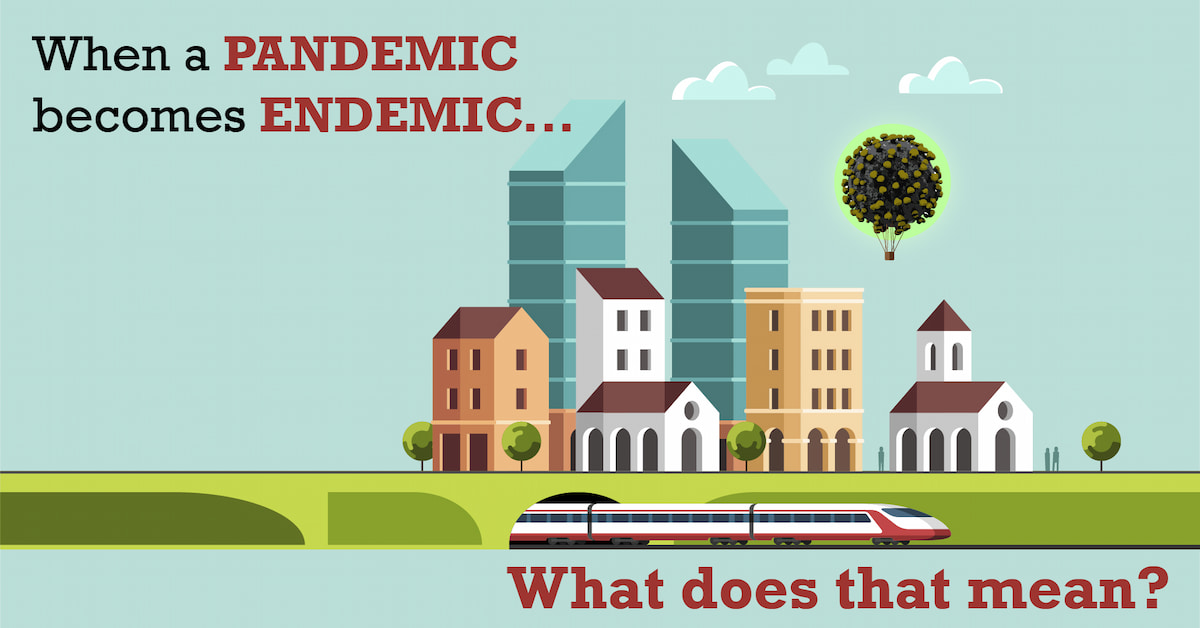 With declining rates of COVID-19 globally, some areas of the world are entering what is called the "endemic phase" of the pandemic. While the virus has not been eradicated, this new phase brings about a sense of normality, or at least a close approximation of it, to a community. In today's post, we'll look at what it means when a pandemic becomes endemic.

When SARS-CoV-2 began to spread in China, it was considered an epidemic. When the World Health Organization (WHO) declared the spread of SARS-CoV-2 a pandemic, they were describing the rapid, exponential, global spread of the novel coronavirus. Now, cities such as New York and countries such as Portugal have entered an endemic phase of the virus spread. What do these terms mean?

Let's start with epidemic. For a disease to be considered an epidemic, it has to arise suddenly and unexpectedly. It doesn't have to be a new, or novel, disease, or even contagious. (We can have epidemics of obesity or diabetes, for example.) Furthermore, an epidemic is characterized by exponential growth, so it spreads rapidly, and many people are effected. Unlike an outbreak, which may be fast and sudden but highly localized, an epidemic is more widespread and can be overwhelming to medical facilities.

When an epidemic spreads globally, it is considered a pandemic. This kind of exponential growth can be due to a virus becoming more virulent and therefore more efficient at transmission. A pandemic can also be caused by a localized pathogen being introduced to new areas where there is low immunity. Global issues such as war, climate change, and famine can also enable a disease to reach pandemic levels, due to overcrowding, increased sitting water, or poor nutrition leading to weaker immune systems. Novel viruses can easily cause pandemics because there is no widespread immunity. Recurring but mutating viruses, such as influenza, can cause pandemics if the strain is more efficient at transmission and there is low immunity due to low vaccination participation.

When a population has gained widespread immunity, a disease can enter an endemic phase, which means it is predictable, chronic, and manageable. Widespread immunity can be achieved through vaccination or recurring exposure to the disease (lots of people have already gotten it in earlier waves of the disease). This is the case with New York City, which, thanks to high vaccination participation and more cases during the early part of the spread, has widespread immunity. This means COVID-19 does not spread as efficiently, and cases that become serious can be handled by medical facilities. This is the case with typical influenza spread, which even though it is widespread, is still considered endemic. It's predictable (winter time), chronic (it happens each year), and manageable (medical facilities are not overwhelmed with cases).

Some diseases are endemic without ever being pandemic or epidemic. Some endemic diseases are tightly linked to environmental factors unique to that location. For example, in highly polluted cities, asthma can be endemic. In swampy areas in countries without sufficient infrastructure, yellow fever and malaria can be endemic. We do not want to become complacent with endemic disease, however, and considered them inevitable. We can reduce pollution, improve infrastructure, and work to reverse climate change.

A great example of how we can reduce endemic disease is one that effects millions of Americans each year: Healthcare associated infections (HAIs) were once considered endemic to hospital care (and in some areas, are still seen as such). Through concerted efforts to reduce pathogenic bioburden, however, HAI rates can and are going down. One of the ways to reduce bioburden is to change the environmental factors that make infections endemic. Biocidal surfaces, for example, change the environment from one that encourages bacterial growth to one that continuously destroys bacterial contamination and reduces HAIs.

Ideally, a disease will disappear and no one will ever become infected again. Smallpox, through decades of work in global vaccination efforts, has been fully eradicated. A close second to complete eradication, however, is achieving endemic levels. It may not be our desired level of disease, but as a community, we can handle sporadic cases of COVID-19. If we can reach widespread immunity, we can return to life as usual without exponential growth of the disease that will then overwhelm our medical facilities.