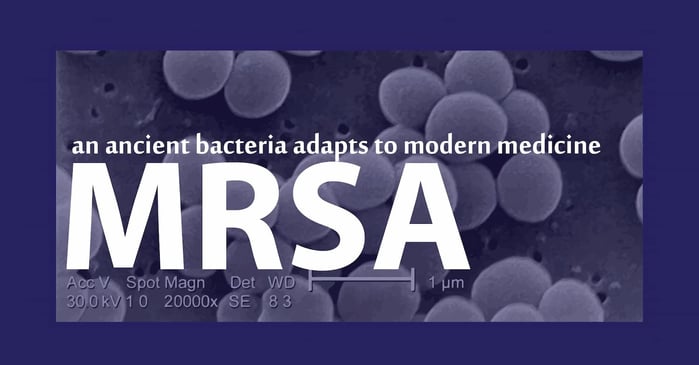 This post continues our MRSA series in support of MRSA Awareness Month.

Staphylococcus aureus has claimed its share of lives throughout history. The infections caused by these common bacteria led to painful boils, respiratory illness, and death, and have been found in medical records dating back over two thousand years.

The bacterium responsible for all this death was first identified and named in the 1880s by Scottish surgeon, Sir Alexander Ogston; "staphylococcus" for its round, clustered shape and "aureus" for the golden hue of its colonies when grown in a lab.

The plague of this and other bacterial infections was over with the discovery of antibiotics in 1928, specifically, penicillin.The mold Penicillium rubens wafted in through an inadvertently open window in the laboratory of another Scottish scientist, Alexander Fleming. The mold spores landed on several open Petri dishes of Staphylococcus aureus, and to the surprise of Fleming, killed the bacteria surrounding it. An incredible stroke of luck led ultimately to a treatment that would save millions of lives.

While this discovery would set the stage for the use of antibiotics, an inability to mass-produce the penicillin created by this particular strain of mold prevented its widespread use. With the onset of World War II and the need for remedies to cure ailing and dying soldiers, a push to find a more potent mold strain was made. The scientists working on this conundrum sent out the word and thousands of samples of molds from around the world were sent to their offices in Peoria, Illinois. This resulted in yet another humble beginning to an extraordinary medical revolution: the mold Penicillium chrysogenum was found not in some exotic soil halfway around the world, but on a cantaloupe brought in by a housewife right in Peoria. The mold on the cantaloupe she sent to the lab was incredibly potent. It produced many hundred times more penicillin than Penicillium rubens, and in a somewhat Frankensteinian plot twist, was mutated to produce thousands of times more penicillin by being exposed to X-rays and UV rays.

What resulted was a massive, wide-spread, euphoric use of penicillin across the Western world. Finally, there as a cure for the infections that had caused death for millennia. It was an absolute miracle drug, and was dispensed liberally.

Unfortunately, this widespread use led to MRSA.

Staphylococcus aureus has developed a resistance to beta-lactam antibiotics by altering its cell wall proteins. While newer antibiotics can still be used against MRSA, this resilient bacteria has been shown to develop resistance against other classes of antibiotics as well.

Some interesting historical notes about MRSA: