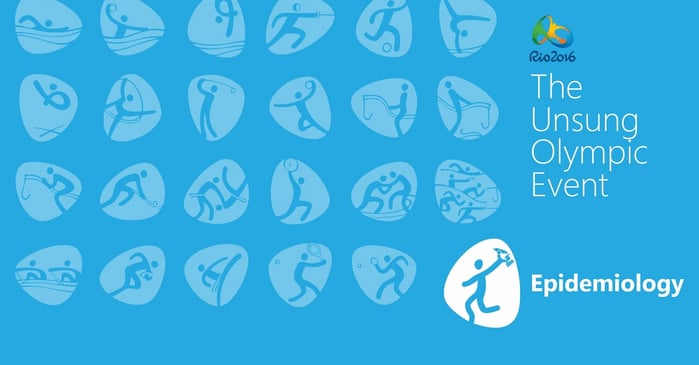 Millions of global visitors. Packed venues. One city. How is it possible that the Olympics have always had such a clean bill of health for infectious diseases? Today's post explores the behind-the-scenes heroes that keep everyone healthy

One answer: That unsung Olympic event, epidemiology. Epidemiologists are experts in not only diseases, but also in how they spread, conditions that enable transmission, and ways to prevent outbreaks. As Olympic events are planned years in advance, epidemiologists pay particular attention to infrastructures for clean water, waste management, crowd movements, and lodging. Preparations for medical services, including procedures for incident reporting, treatment of symptoms, and potential isolation protocols are well-defined and established long before the first visitor arrives, and are subject to review by not only the host country but also the oversight Olympic committees, both of whom have epidemiologists among their ranks.

The Olympics have served as a major catalyst for change in medical care. Concern over the health of marathoners prompted officials at the 1928 Games to require athletes have a medical certificate stating they were healthy enough to participate, a movement resulting in the first international federation of sports medicine. With the building of the first Olympic Village in 1932, concerted efforts were made to attend to the many medical needs of athletes, including the installation of footbaths to prevent athlete's foot (infection caused by tinea pedis fungus). Baths, pools, and footbaths were regularly disinfected at the 1936 Berlin Games and thereafter, with the regular participation of a large medical team beginning with the 1952 Helsinki Games.

In recent years, medical teams have adopted internet-enabled technologies that allowed for real-time tracking of symptoms and diagnosis, using global networks such as GeoSentinel, HealthMap, and ProMed. These applications facilitate communications and modeling, two critical aspects of epidemiology. Finally, the involvement of World Health Organization epidemiologists makes sure that those attending the Olympics are informed about vaccinations, threats, and ways to avoid becoming sick.

The 2016 Summer Olympics faced a new challenge in the city of Rio de Janeiro, Brazil. The first tropical city to host a summer games, this location presented the threat of diseases never before associated with an Olympic location: Dengue fever, typhoid, malaria, yellow fever, bacteria-laden water… and now, Zika virus. The risk may seem sufficient to make some apprehensive about attending or even competing in this years’ games, but the threat remains below any threshold that would prompt the WHO or the Olympic committees to cancel them.

Why are these threats not enough to cancel or move the Olympics? Given the significant time for preparation and the ability to collaborate on establishing guidelines, the WHO (with support from its epidemiologists) determined that following the recommended precautions before traveling to Brazil (vaccinations) and adhering to the health advice while in Brazil (wearing mosquito repellent, avoiding areas with stagnant water, etc.) were sufficient to protect visitors and athletes. While the WHO did recommend pregnant women not travel to the Games (due to the virus’ effect on the fetus), they maintain that “there is no public health justification for postponing or canceling the games.”

When you think about the history of the Olympics, it does (literally) take moving mountains to cancel or move this global event. The only times the Olympics were altogether canceled were during WWI and WWII, when the people of the world coming together in peace was impossible. The only time the location of the Games was moved was due to the eruption of Mt. Vesuvius (and ongoing economic troubles in Italy) in 1908. Anything else, and the epidemiologists have you covered.

Perhaps the Olympics is a powerful model for the successful and necessary application of epidemiology in preparation for planned gatherings, especially at larger scales. With a consideration of epidemiology across the wider playing field, could we experience the same levels of prevention at smaller venues such as the Final Four or the Super Bowl, at the DNC or RNC, or even at a U2 concert? Where people gather in large numbers and move from one place to another, opportunistic pathogens will travel with them and disease will spread. It seems there is a place in the global, daily arena for the unsung hero, the epidemiologist.