4 for the 4th: Four Doctors Who Signed the Declaration of Independence 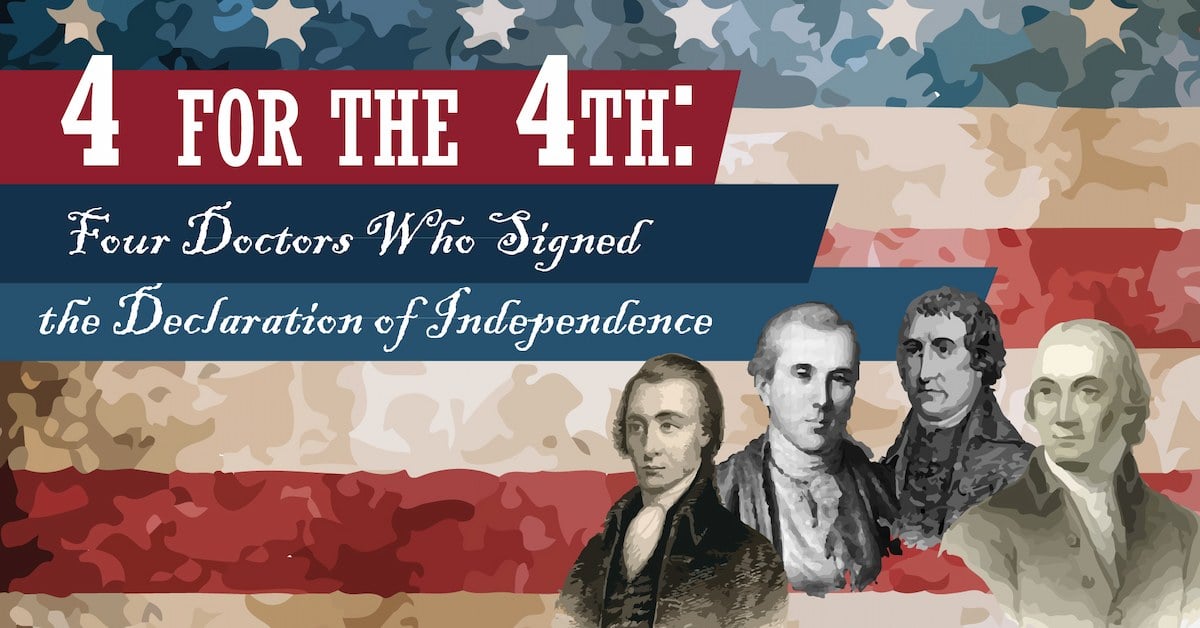 Motivated by reason, civil duty, and patriotism, representatives from the Colonies gathered in Philadelphia to put their names on an historic document. That very act put their lives at risk. The date was July 4, 1776 and the document was the Declaration of Independence. Among the 56 signatories, four came from the field of medicine. In today’s post, we’ll examine these individuals and learn about their legacy beyond the document.

The most eminent physician of his day, Dr. Rush advised generals during the Revolutionary War, write powerful anti-slavery essays, and prepared Meriweather Lewis for his expedition west. While some of his medical beliefs were mired in the past (he was an avid proponent of bloodletting), in others he was way ahead of his time. He proposed that mental illness was due to a chemical imbalance in the brain, that alcohol addiction was a disease, and that safe conditions for the mentally ill were vital to their ethical treatment. He also championed the need for cleanliness to support health and prevent disease, particularly among soldiers. His efforts to ensure hygienic conditions for those in the military (who suffered far more casualties from disease than from the enemy) did a great deal to mitigate exposure to disease.

Dr. Thornton ran a very successful medical practice in New Hampshire, but his patriotism helped him aspire to an even greater legacy. Seeing the need for military doctors, he volunteered his medical skills during a successful military attack resulting in the successful capture of a key fort at the base of the St. Laurence River. While he retired from his medical practice to become a gentleman farmer, Dr. Thornton’s participation in the revolution helped secure the independence of New Hampshire, and as a result, the nation.

Dr. Bartlett began his career as a the sole doctor in a frontier town before he had even turned 21. During an outbreak of what was then called throat distemper (most likely strep throat), he used the scientific method to demonstrate that Peruvian bark could relieve the symptoms long enough for the patient to recover. When uprisings against British rule began, he supported the cause, even at great personal loss (his home was burnt down by his opposition). After successful representation at the Continental Congress, he went on to be elected as the Governor of New Hampshire, where one of his first acts was to recognize the New Hampshire Medical Society.

Dr. Hall was born in the northern colonies, but his legacy is established in South Carolina and Georgia, where he would live and participate in the Revolution. He argued for Georgia to join in the Second Continental Congress, where he was the sole representative from his state. He would go on to serve as Governor for one year, but then returned to his quiet medical practice.

Coming from diverse backgrounds, these Revolutionaries came together with a singular mission: To gain independence for their states and for the nation. It is fitting that among the first men to put their names to a potentially dangerous document - a document that put liberty on equal footing with life itself - were those entrusted with healthcare. Perhaps they could see medical and humanitarian benefits of “life, liberty, and the pursuit of happiness.” But as members of a unique group in American history, these four doctors, four signers of the Declaration of Independence, helped set the foundation for the nation we celebrate today.