Is A Virus Living or Non-Living? Yes. Part 2

In our last post, we explored the basics of virus structure, makeup, size, and shape. We determined that this infectious agent had characteristics of living organisms as well as nonliving matter. Today's post brings this information closer to home - How do they infect us and make us sick?

How do viruses lead to infection?

In our last post we discussed the "host cell". Viruses can't reproduce by themselves - they are simply genetic materials with no machinery (the blueprint rather than the house).  For a virus to spread, it needs to hijack a host cell and make it do its dirty work. Simply put, a virus attaches itself to a cell's membrane and injects its genetic information into the cell. The cell, doing its regular work of copying genetic material in preparation for cell division, creates copies of the virus genetic material. The virus assembles itself inside the cell and then is released for further replication either by bursting through the cell wall or by budding, during which small virus packets are pushed through the membrane, taking a bit of membrane with them as a coating (imagine escape pods leaving a spaceship). The virus copies released go on to hijack other cells, replicating again, exponentially copying the virus and destroying living cells in the process.

How do viruses make us sick?

The first step in a viral infection is exposure to the virus itself. Depending on the virus, that can be through airborne droplets released when an infected person coughs or sneezes, through exposure to contaminated body fluids via a break in the skin, or through ingestion of contaminated food or water. The second step is the hijacking of our cells. Viruses make us sick by destroying our living cells. They have the ability to attach themselves to certain types of cells (some viruses can attach to lung cells, others to blood cells, etc.), use them to replicate, and in the process, destroy the cells. (Amazing video of the entire process here.) When this happens exponentially, with millions upon millions of cells destroyed, we get sick. We don't always get sick right away, however. The herpes virus is activated on and off throughout a person's life. Viruses that cause cancer can make changes over time that are only noticed decades later.

How do we fight viral infections?

So how to we kill these living/non-living packets of genetic information? We can't use antibiotics, because these medications attack the living portions of bacteria - the machinery that runs the cell. Viruses don't have this machinery - they are all code. If a bacteria is a house, viruses are just the blueprints of a house. You can't shut off the electricity or the plumbing on a blueprint.

Luckily, our bodies have ways of fighting viral infections. Our immune system is equipped to fight off viral infections (to a certain extent). Those aches and pains you feel, including your fever and malaise, are all side-effects of your body's fight against the invading virus. The immune system has mechanisms which allow it to identify, isolate, and destroy foreign material such as viruses. It deploys white blood cells of increasing power, and also produce antibodies which kill the virus. If the white blood cells are successful and the virus is destroyed, some of these specialized cells stick around to be ready to fight if that same virus attacks again. This is why vaccines work: The body is provided with antibodies for a specific virus, say rubella or mumps, so that if you are exposed to that virus, your body is ready to attack and destroy it. Some viruses mutate and require different antibodies to be destroyed; this is why the annual flu shot is different each year. Other viral infections such as the common cold are caused by such a huge array of possible viruses that no single vaccine can protect us. Still other viruses remain in the body in a dormant stage, or hide out in certain cells where the immune system cannot find them. Both of these types of viruses (for example, chickenpox and herpes) can become reactivated years and year after initial exposure. 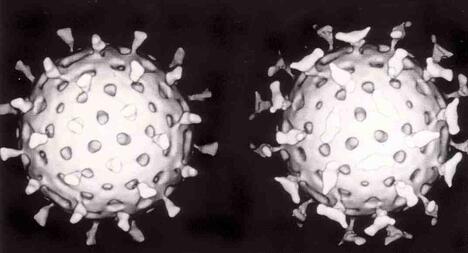 Two Rotavirus particles: The particle on the right has antibodies attached to the attachment spikes, preventing it from implanting into a living cell. How awesome is that? Photo Credit: GrahamColm at en.wikipedia

There are antiviral medications, and still more are being developed. One of the most recognized is AZT, the combination of drugs used to treat HIV, a "cocktail" of antivirals that helps prevent resistance by using a variety of attacks on the virus. There are a number of antiviral medications available to lessen the symptoms of the seasonal flu virus (one brand name is Tamiflu). Most of these drugs work by inhibiting growth of a viral infection.

Viruses. A possible key to unlocking the mysteries of life, yet not alive. Vital to the creating of new genes and gene transfer which enrich life, yet the cause of the greatest pandemics known to humanity. We hope our exploration of this organic enigma has answered more questions than are left unanswered, and perhaps have sparked a few new ones!