Is a Virus Living or Non-Living? Yes. Part 1

What exactly is a virus? We know they are not susceptible to antibiotics. We know that they can cause anything from the common cold, the Spanish Flu Pandemic of 1918 to our most recent COVID-19. Viruses are called "infectious agents," but what are they, exactly? Turns out the answer is not simple.

In some ways, viruses are both living and non-living. They have genetic information that evolves through natural selection. They assemble themselves. You can't say either of those things about rocks, clouds, or stars. But they don't have any kind of internal chemical processes for sustaining life, such as growing, reproducing, or adapting to their environment. In this way, they are pretty much as inert as a non-living material. So what are they? Many scientists believe they are a precursor to life, a pre-life form that gives us an idea of how life evolved from self-assembling, self-replicating organic molecules. Others believe that they are more like seeds, with the potential for life, if they find the right environment (a cell host). Still others see them as simple parasites, runaway portions of genes from an earlier host. So this question has not been fully answered, but the pursuit of the answer has led to many fascinating discoveries.

What are viruses made of? 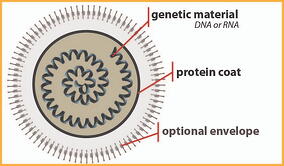 There are two parts that make up every virus. First, there is the genetic material. Just like the cells of any living organism, a virus contains genetic material in the form of nucleic acid. Some viruses contain  ribonucleic acid (RNA) while others have deoxyribonucleic acid (DNA) molecules.  But unlike living cells, the virus itself does not have the machinery necessary to reproduce this material (more on this soon), only to assemble it. The second basic component of a virus is a protein coat. This coat is made up of identical units of protein that assemble into structures as coded by (constructed by) their genetic material, the RNA or DNA molecule they cover. There is a third component of virus structure that only some viruses have. This structure is a membrane envelope which is made in part from virus-encoded proteins and proteins from the host cell.

What shape is a virus?

Viruses are tiny, smaller by far than bacteria. They come in a variety of shapes and sizes, from simple rods to complex spaceship-like structures. In this graphic you can see their relative sizes and a few of the more common shapes.

We have only recently been able to actually see viruses. With the invention of the electron microscope, scientists have been able to visualize not only the viruses themselves, but also the actual moment of cell invasion and rupture.

These microscopic infectious agents are the culprits of numerous human ailments, as well as animal and plant diseases. They have been around for millennia, and have left a path of destruction in their wake. Just how do we become infected with a virus, and what weapons do we have against these villains? We will answer those questions in our next post.