So Many Disease Graphs: What Do They Mean? 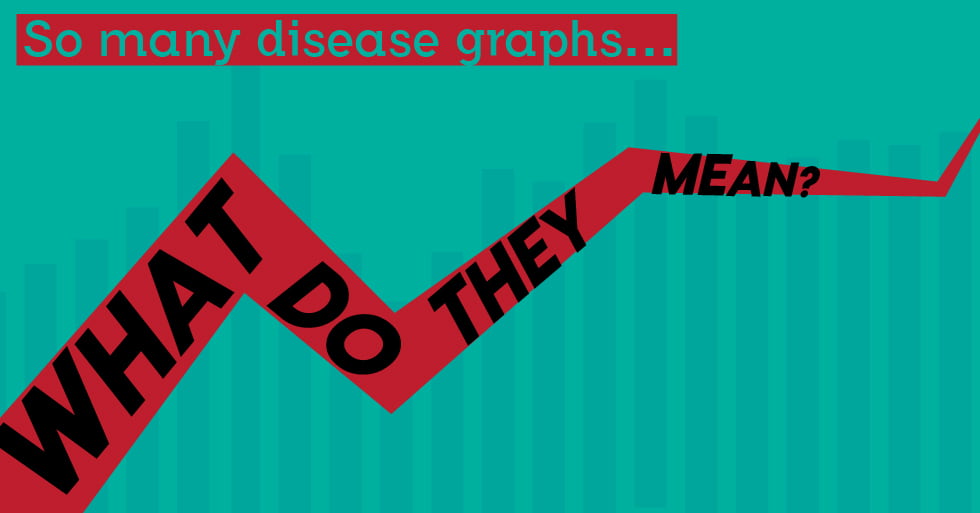 Data about the ongoing pandemic is introducing the general public to a very familiar topic in epidemiology: Epi curves. These displays of data help epidemiologists visualize trends in positive cases, transmission, and so much more. It's important for the general public to see and understand the data being presented now more than ever, since health experts are using these charts to convince communities to abide by social distancing, mask-wearing, and now, school closings. In today's post, we'll look at some of these graphs and what they can tell us about all outbreaks, including COVID-19, as well as hospital-associated infections. 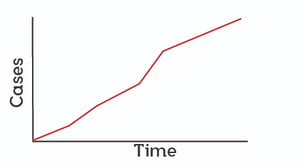 Let's add another aspect of outbreaks: Daily number of new cases. While the previous graph shows how the case total goes up and up as more cases are identified, this graph shows a new tally for each day. The trend here shows how the outbreak spreads and then slows until there are no new cases. So even though the number of total cases can only go up, the number of daily new cases can go up or down. The result is a classic outbreak epi curve for a point-source outbreak. 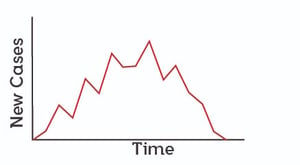 The previous graph shows the classic epi curve for an outbreak with a single source: A bowl of egg salad at a party, for instance, or an infected restaurant worker's hands, or even a dirty hospital surface. These outbreaks are caused by a contaminated surface, not person-to-person. But what if the disease is one that is spread person-to-person? Then you get a propagated outbreak curve. It's different because as people get infected, they go on to infect others, who also infect others, and so on. In this curve, you look at new or even just active cases over time, and you see a series of peaks. 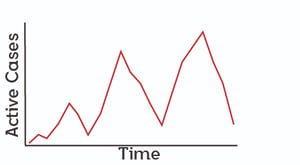 Below is a graph of the rolling 3-day average of new cases of COVID-19 since February. You can see the classic peaks of the propagated outbreak curve. 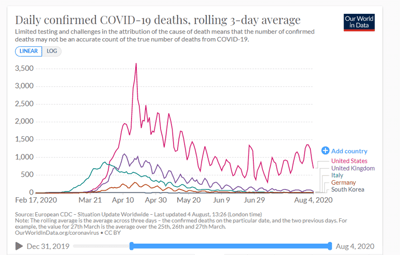 Why the peaks? They demonstrate the impact of the incubation period of the disease. In the case of COVID-19, the incubation period (time time from infection to symptoms) is 5 - 14 days. So there will be a wave of infections, followed by a wave of those infected by that first group, followed by further, ever-higher peaks as the disease spreads without control. See how the US numbers gradually go down, but still has the peaks? This shows that fewer people were transmitting the disease. The peaks are still there as the waves spread, but interventions - social distancing, masks, contract tracing - were steadily reducing the number of people that could spread the disease further. That slight upward trend for the US in July and up to today? It means our interventions are not being followed as well as they had been ("flattening the curve") , so more people are becoming infected and passing it on - pushing the trend of new daily cases ever upward - again.

Other countries see continued peaks, as is expected, but with a consistently lower trending curve. These low trends will continue for any population that has good interventions in place until there is a vaccine or the virus dies out on its own. A few cases will pop up, followed by the few people they infected until their symptoms became apparent, then as contact tracing and quarantining are put in place, those numbers will go down again. This is what we are aiming for in the US, but it can't happen without adherence to interventions - it won't happen on its own. (On its own, it will just keep going up.)

These are the basic curves to understand during this pandemic, but also to better understand how preventable infections can spread through a hospital. If a facility is continuously weak in surface disinfection, you will see what looks like a series of point-source outbreak curves as pathogens remain on surfaces and are transmitted over and over again, without breaking the cycle. This is called a common intermittent source.

It shows that while the outbreak is contained, the source remains a problem. This pattern can be seen with a contaminated piece of equipment that is only used intermittently, or a surface that is inconsistently cleaned. 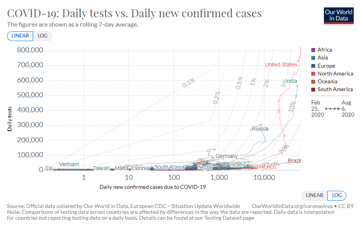 Not everyone will automatically interpret a graph with ease. But when graphs play a role in mobilizing a population to adhere to interventions or work towards a solution during a pandemic, we have to be especially clear. When trying to make changes that lead to better interventions for hospital-associated infections, we have to be sure our graphs communicate the urgency to decision-makers.

Graphs can take time to understand, often requiring we look at the data carefully and make sure we note what is being shown and what can be interpreted. If we are in a position of educating the general public about critical, life-saving information and we choose to present that with graphs, then we must pay particular attention to how we set the stage for understanding, and not just assume the audience will see what we see. The graph above is a perfect example. This graph is comparing tests to cases, but uses the line as time. It would require the layperson some time to see how it all worked together! But it communicates an incredibly important concept, which can not only help protect a community from the virus, but also from misinformation.

Have you seen any COVID-19 or HAI charts that are particularly well-designed, or uniquely hard to understand? Share them below!