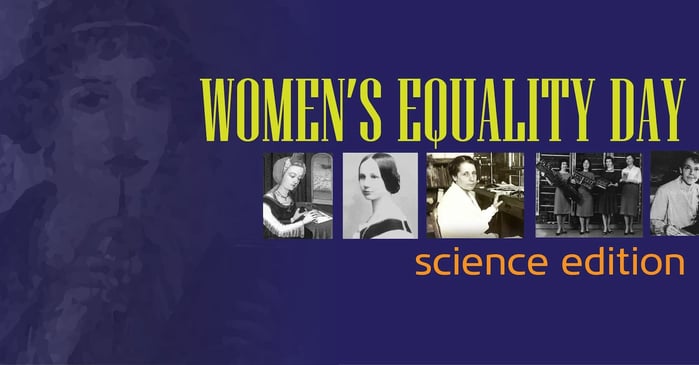 Less than 100 years ago today, American women were given the right to vote. For less than half of that time, August 26th has been recognized as Women’s Equality Day, a day to celebrate the struggles and successes of this movement to allow women to have a say in elections, and a voice in society as a whole. This struggle for a say and a voice continues, and while there has been tremendous progress, this struggle is quite visible in the world of science. Today’s post will celebrate the achievements of female scientists, while also discussing the two major obstacles women in science face, even today.

Obstacle #1: Getting in the Door

Let’s start with a fascinating and persistent scientist, Marjory Stephenson. Thanks to the encouragement from a governess, young Marjorie decided to study science and medicine. In 1903, she left her home to study natural sciences at Cambridge, where she had to work around restrictions that prevented women from entering chemistry labs. Continuing her studies also proved difficult and, after being denied a scholarship to study medicine, she almost became a domestic science teacher. Fortunately, her abilities were recognized by a mentor, Robert Plimmer, who hired her to research metabolism in his laboratory. She went on to literally write the book about bacterial metabolism, to be the first woman elected to the Royal Society, and to lead the Society for General Microbiology as its second President (the first being Louis Pasteur).

Thankfully, women today have the same permission to study science and pursue a career as male scientists, something that was not true as recently as the 1950s. Gone are the days of female students not allowed to study chemistry or enter a chemistry laboratory. It has been decades since high schools had to be “required” to offer the same curriculum to girls as to boys. This is significant progress that has allowed new generations of girls to become interested in science.

However, this permission is not quite the same as access, since cultural and societal pressures on girls and women has yet to adapt to the idea of women in science. Research confirms there is significant attrition of female students in the sciences – and a significant lack of representation of women in faculty and research positions.  This disparity has led to some pressure on universities and research institutions to pay greater attention to the hiring of well-qualified female scientists. In addition, the great efforts in recent years to promote the idea of science and math study to girls and young women seems to be having a positive effect: Since 1993, the number of women receiving doctoral degrees in biosciences has increased dramatically, from 37.4% of degrees to 52.4%. Similar growth is seen in engineering doctoral degrees.

While some would argue that with no more bars being placed on women to enter into science, the problem of equality for women in the sciences no longer exists. However, a recent study demonstrated that there is more to achieving equality in the sciences than simply being permitted access. In this study, hundreds of university science faculty were provided with a resume and asked to provide feedback on the quality of the applicant. The resumes sent for feedback were all identical – except one was for “John” and the other for “Jennifer.” The results were dramatic. “Jennifer” was consistently rated as less competent. Even when the faculty member determined she was qualified for the job, her salary offer was on average $4,000 less than those hiring “John.” This gender bias, even amongst scientists and even amongst female scientists, is a significant barrier that many are working to overcome.

The story of Rosalind Franklin, another dedicated scientist, reveals our second obstacle. As a child in London in the 1930s, she was lucky to happen to attend one of the only schools that allowed girls to study chemistry and physics. She excelled at both subjects, and despite not being allowed into the dining halls or laboratories at Cambridge University, went on to run a lab studying X-rays, crystallographic photography, and DNA. Her lab’s photo of DNA enabled Watson and Crick to come up with the structure of DNA, winning the two men the Nobel Prize. She experienced challenges to studying science, but also to having her contributions recognized, which brings us to the next obstacle.

Obstacle #2: Recognition and the Matilda Effect

Many scientific discoveries are recorded in our history books and even our popular culture with missing elements. Charles Babbage invented the first mechanical calculator, truly a significant step towards modern computing. But how many people know that a young woman, Ada Lovelace, was responsible for conceiving of the algorithms – software fundamentals such as recursive loops and subroutines – that made the hardware function? Let’s consider the great Nobel Prize winners, Al Hershey, Werner Arber and Joshua Lederberg. Each was recognized for his contribution to the advancement of microbiology, and yet, it was their female team members who discovered the critical component of their work: Martha Chase, who made landmark discoveries in DNA, Daisy Roulland-Dussoix, who discovered restriction enzymes, and Esther Lederberg, who invented replica plating and discovered the Fertility Factor (F Factor) in bacterial DNA. Why do we not know the names Lovelace, Chase, Rulland-Dussoix, and the MRS. Lederberg?

One historian calls it the Matilda Effect. This is the tendency to cite and recognize the male members of scientific research teams and eliminate the female members (as with the Matthew Effect, which is the bias towards better-known scientists) and has been well-documented by many studies. Not only are the works of female scientists not as frequently cited, those that make breakthroughs that cannot be ignored are often attributed to only the male members of the team. There are countless examples, with many more doubtless lost to history. Notable cases include Frieda Robsheit-Robbins, whose male team members alone were awarded the 1934 Nobel Prize despite her being a co-author on all their discoveries (her team members protested and shared their prize equally with her). Lise Meitner, a nuclear researcher who coined the term “nuclear fission” and shared many breakthroughs with her partner Otto Hahn, was denied a part of his Nobel Prize in 1944. Many similar snubs followed in the decades to come.

What can happen when we empower women in science?

The effects are powerful when more women have a voice in science. Born just before the end of WWII, Elizabeth Blackburn grew up in a world where access to science was still restricted for women. Her girls’ school in Australia did not offer physics, but luckily she was able to attend evening classes at another school. She excelled and made her way through advanced studies at university and graduate school, bringing her first to Cambridge University for her doctorate and then Yale University for postdoctoral work. Now married, Blackburn followed her husband to the University of California, where despite her qualifications and experience, she failed to find a position. Securing a grant instead, she began researching DNA telomeres, which continued after finally being hired by UC San Francisco. Her work on telomeres continued, ultimately leading to her discovery of telomerase in 1984, an enzyme that preserves chromosomes from deterioration - and may possibly be the answer to cancer and even aging. In a profile of women in science, Blackburn discusses the challenges of achieving in science as a woman, attributing it in part to “luck,” the fortune of being taken seriously and given opportunities. This “luck” also enabled her to maintain a marriage and have a family, a challenge to many women who face the significant time requirements of a science profession where the most demanding tenure pressures overlap with childbearing years. She has made a concerted effort to encourage women to participate in her lab and in her research, and to this day, women dominate the field of telomerase research. In the 2002 profile, when asked if a Nobel Prize was in her future, she stated “If you look at the track record, it would certainly factor against it. But every now and then, you know, someone has to make a gesture to prove the track record is wrong.”

Seven years after this article, and 25 years after the discovery, Elizabeth Blackburn and her partners Carol W. Greider and Jack W. Szostak were awarded the 2009 Nobel Prize,"for the discovery of how chromosomes are protected by telomeres and the enzyme telomerase."

On Women’s Equality Day, let’s celebrate the women that persevered in science enough to make not only essential breakthroughs, but also to break through the limitations and obstacles that were set in their way. Let’s remember that equality is not about lowering standards to allow women to succeed, but rather removing obstacles based on gender. We’ve seen the incredible contributions of women. We can’t afford to leave it to luck.