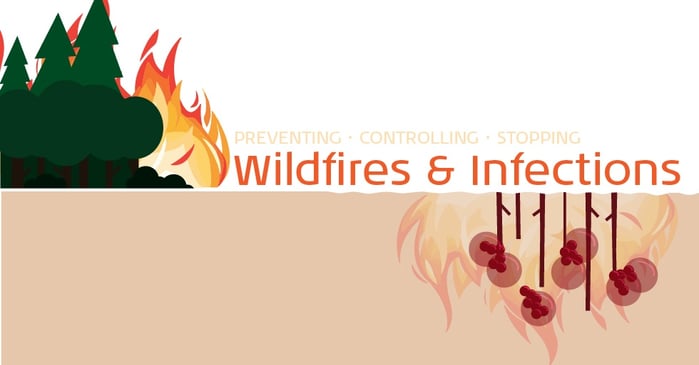 Over the past week, firefighters have been working to control record setting fires throughout California. These are lethal fires, consuming entire neighborhoods as they grow and spread. All of us have seen the images, and the headlines capture the urgency of the response teams as they fight to control this powerful force of nature. Those of us in infection control may see in these fires similar traits with an opportunistic pathogen, spreading quickly through a patient's body and leaving destruction in its wake. It turns out this comparison is as old as the science of infection control itself, tracing back to a word coined in the 1800s: Fomites.

Way back when people were just figuring out that infections spread through germs, someone came up with a special term for a surface that may be contaminated with with infectious material and play a role in their transmission. Formed from the Latin word for kindling, "fomes" (from which we also get the heat-related word foment), fomites would seem to be an odd choice for a description of a contaminated surface. However, it is no coincidence; these early researchers recognized the parallels between fire and infection when they chose the word. Kindling allows a fire to start, burning long enough for larger fuel to ignite. Similarly, the contaminated surface allows the pathogen to survive long enough for transmission to a suitable host, where it can infect and begin to spread.

Fires and firefighting techniques can serve as a helpful analogy for infection and infection control. Just as the firefighter uses or adjusts the environment of the fire to control it, so does the physician treating an infection. Let's take a look at how this is done.

The spread of a fire can be limited by a boundary that limits access to fuel. This can be a natural boundary, such as a river, or a man-made boundary made by clearing out combustible material. In controlling an infection, both natural and man-made boundaries can be useful. Our bodies provide the natural boundaries: our immune system response as well as our own personal microbiome, full of competing bacteria that can help fight off pathogenic bacteria. Man-made boundaries to control the spread of infection include antiseptics to clean the skin, as well as antibiotics to kill the bacteria from inside.

Firefighters pay particular attention to the most active and most likely to spread parts of a fire. These areas receive priority and are the target of intense activity such as aerial dumping of retardant. Infections also have hot spots, areas where bacterial contamination could lead to a full-blown infection. Indwelling medical devices such as urinary or bloodstream catheters could be considered hot spots, as could areas of bacterial colonization on a patient's body. Infection prevention protocols are set up to monitor indwelling devices and remove them as soon as possible. As for colonized patients (asymptomatic and symptomatic), isolation can be used to control the pathogen from spreading in the hospital while chlorhexidine bathing can control spreading on the patient's body.

After a fire has consumed all the available fuel in an area (grass, trees, homes), a team of firefighters combs through the scorched area to hunt for smoldering areas that could reignite, burning embers, and spot fires. They also remove any remaining material that could function as fuel. Without this effort, an ember or small fire could suddenly gain access to new fuel and quickly grow. After a patient has been treated for an infection, his or her medical team will continue to monitor for evidence of pathogens. Some of the pathogens causing the infection may have survived the first round of antibiotics and require additional rounds, or an altogether different antibiotic, especially in the case of drug-resistant pathogens. Some infections, such as Clostridium difficile, have a much higher chance of being recurring thanks to endospores that survive antibiotics, some cleaners, and persist in the environment (on fomites), waiting for an opportunity to reinfect.

In the 150 years since the term fomite was first coined, we have discovered ways to prevent, control and end both wildfires and infections. Nature is still a mighty foe, however. We must all do our parts to help prevent both forms of disaster. Not only do we have to be careful with sparks during hot and dry summers, we also, as a society, have to learn how to build fires safely and promote environmental stewardship. Preventing infections is no different - we can help by washing our hands, but we must also, again, as a society, work towards a culture of infection prevention, appropriate use of antibiotics, and better control of our hospital fomites - those surfaces that could potentially lead to an infection that spreads... like wildfire.