Sickly Stowaways: Pathogens on a Plane 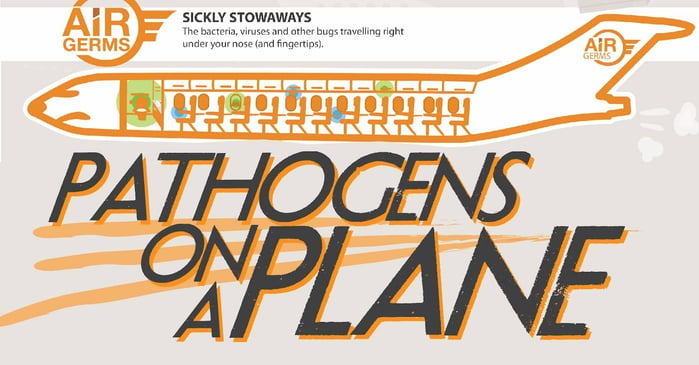 Tomorrow marks the start of the busy holiday air travel season.  According to Airlines of America, 884 flights will be added to accommodate over 70 thousand extra daily passengers.  Therefore, our attention turns to the packed plains that will carry you to visit your loved ones, and the stowaways traveling right under your noses (and fingertips): Microorganisms.Since the first commercial flights became available in the early 20th century, the popularity of air travel has grown exponentially. From a form of travel reserved for the rich and adventurous, airplane flights became steadily more accessible, more affordable, and more global. Today, over a billion people travel by plane each year, a number that is expected to double over the next 20 years.

Today’s commercial aviation is a highly regulated industry. In the United States, the Federal Aviation Administration (FAA) governs airplane construction, airports, air traffic, and all staffing. It is vital that this industry be regulated to this extent, as it involves complex machinery, requires highly-skilled employees, and literally covers the globe in scope. The FAA provides the oversight to keep us safe. If something goes wrong – as it sometimes does – tragedy strikes. This tragedy makes headlines, inspires changes, and motivates improvements.

The one thing the FAA does not regulate, however, also has the potential to cause passenger harm. It is the cleaning of airplanes. The schedule and extent of cleaning is left entirely to the airlines operating the flights, making cleanliness an attribute that can vary greatly between companies, and even between individual flights. With no oversight, monitoring, or standards, the possibility of airplanes contaminated with dangerous pathogens is not only a possibility, it is a reality. 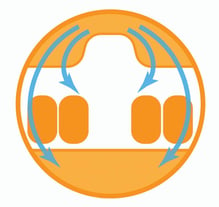 Many people who return from an airplane trip with the sniffles or a full-blown cold blame the plane’s air for their ailment. In fact, the ventilation on commercial airplanes, regulated by the FAA, is designed to minimize the travel of any airborne pathogens. First, the air flow travels from the ceiling, down the walls, and to underfloor filters, meaning that the air is pushed a short distance and keeps air from traveling too far around the cabin. Second, the underfloor filters use HEPA technology to capture between 94 – 99.9% of microbes before the air is recirculated back into the cabin. Third, the air is recirculated 20-30 times per hour, with up to 50% fresh air combined. Should an airborne pathogen be released by a sick traveler, the greatest risk would be only to passengers on the same row, two rows in front, and two rows in back. All the outbreaks traced back to airborne pathogens in plane cabins have confirmed this zone of risk.

In reality, the greatest risk for transmission of disease is through the airplane surfaces. While pathogens picked up by passengers may not lead to sickness for that particular individual, they may lead to colonization on the skin, leading to potential future infection. And with bacteria persisting on surfaces for months, the opportunity for transmission increases with each additional flight. Studies have demonstrated the dirtiest parts of an airplane, and what steps you can take to mitigate the risk of acquiring an infection from an airplane.

The dirtiest part of an airplane, more filthy than any other surface by at least a factor of 10? The tray table. The recommendation to clean your tray table with a disinfecting wipe comes after studies showed that trays were contaminated with high levels of bacteria, even MRSA. Other surfaces you should wipe down are touch screens, seat buttons, belt buckles, and overhead vents. When using the bathroom, use a tissue as a barrier when opening the door, pushing buttons, and using the faucet – and use an alcohol hand-sanitizer afterwards. Use a hand sanitizer after opening the overhead compartment and before eating as well. Things you shouldn’t touch at all? Magazines, magazine pockets, pillows and blankets. Their porous material holds on to bacteria for a very long time and are not cleaned regularly.

Why are airplane surfaces so dirty? It turns out that airplanes are thoroughly cleaned about once a month or every 100 flying hours, which can mean dozens of flights without a wipe-down. Cost-cutting measures, the need for quick turnaround times, and the lack of in-flight cleaning contribute to the de-emphasis of airplane surface cleaning. Bathrooms are the exception: these are thoroughly cleaned after every flight. However, as the flight progresses (especially in long-haul trips spanning hours), the bathroom gets progressively dirtier.

So this holiday season we celebrate the many advantages flight has brought our human population: Quicker, safer, and more affordable travel. But we also recognize the benefits flight has brought the populations of pathogens. The introduction of airplane travel has allowed infectious diseases to spread quicker, with sick passengers taking the flu, measles, and norovirus with them to new populations. (Check out this terrifying simulation here.) An example of this effect in real life was seen with the seasonal flu of 2001-02, a strain that was significantly slowed in its transmission across the globe thanks to the reduced airplane travel following 9/11. Airplane travel is here to stay, so we need to remember that the confined spaces, quick changeover rates, and varied degrees of cleaning practices on airplanes has also allowed bacteria to hitch a ride.