New Variant of SARS-CoV-2: Is it time to panic? 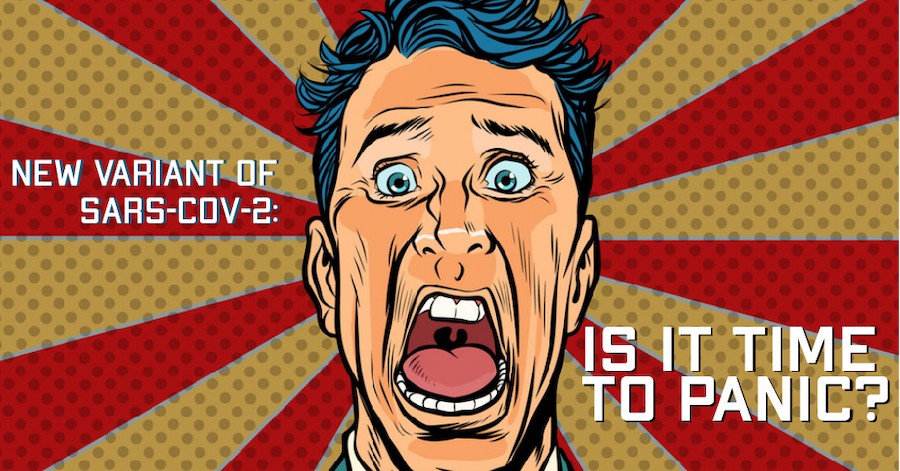 There's no more chilling words in a killer virus action movie than "IT'S MUTATED!" Visions of a virus gone berserk and leaving chaos (or zombies) in its wake are conjured just by hearing that phrase. So it's no surprise that when news of a new variant of SARS-CoV-2, the virus that causes COVID-19, emerging in the UK and elsewhere that people began to panic. In this post, we'll explain why it's actually not time to panic, and how virus mutations are anticipated and expected by scientists working to end the pandemic.

Viruses mutate all the time. Because they replicate by making copies of themselves by hijacking host cells, there are numerous transcription errors that occur, making changes in their RNA which are then copied in later generations. This is the number one reason we have to get a flu shot each year - the influenza virus that spreads varies from one year to the next, requiring a unique vaccine. The same thing has happened to SARS-CoV-2; in fact, over 500 mutations have been reported throughout its year on Earth. These are minor mutations, called antigenic drift. While we are still learning about the virus and its mutations, there is currently no data that supports a more deadly mutation (antigenic shift) at this time.

What this new variant does appear to have is an easier time infecting us. This means that the protein on the "corona" spikes has changed just enough so that it can gain easier access to cells in our bodies. This is an increase in transmissibility. Once it is there, the disease progression appears to be the same - people get no sicker due to catching a variant version of SARS-CoV-2. However, the more people who get infected, the more people at risk for dangerous illness. That is, if 20% of infected individuals develop a more serious case of COVID-19, 20% of a higher number of cases means more serious cases.

So far, no variant has shown an increase in pathogenicity or immunogenicity, and this is great news. Pathogenicity is the ability to cause disease, meaning no variant has been shown to lead to more severe COVID cases (that is, the percentage of serious cases is the same). Immunogenicity is the ability to provoke an immune response - which is a good thing. If a host does not have an immune response to a virus, the host will quickly become overwhelmed by the virus and could die. So far, there is no data to support that the new variant affects pathogenicity or immunogenicity.

What about the vaccine? Will it work against the new variant - and other variants that might arise? All data indicates that yes, the vaccine will work against all known variants. The vaccine targets a variety of spike proteins, not just one, making it extraordinarily difficult for any mutation to affect ALL the target points. (Although the South African variant is showing even more variation.) Also encouraging is that the new variants are also picked up by currently available testing. We hope this post has alleviated any fears reminiscent of B-movie horrors. While the variants are troubling from a transmission point of view, it is not time to panic.