Flesh-Eating Bacteria: What Beach-Associated Infections Can Teach Us About HAIs 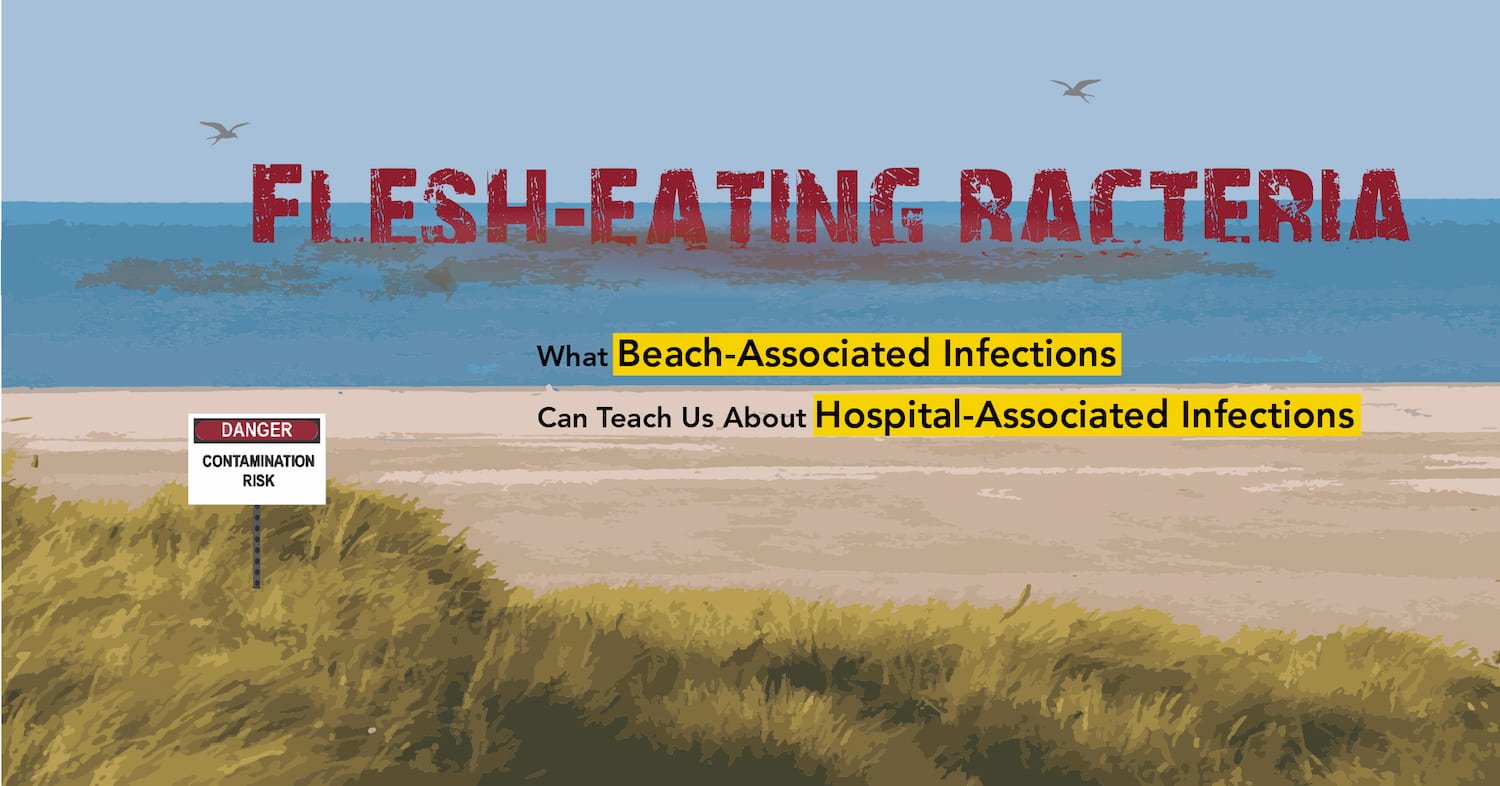 It seems like it's not officially summer without at least once newspaper headline warning us about "flesh-eating bacteria" cases connected to popular beaches. This disturbing trend - there are more and more cases each year - has been connected to climate change as well as agricultural run-off. Whatever the cause, these infections can lead to severe injury and even death. But as it turns out, this health risk can also teach us a few things about a far more fatal crisis: healthcare-acquired infections, or HAIs.

#1 One Name, Many Pathogens

Cases of "flesh-eating bacteria," or necrotizing fasciitis, are caused by a variety of bacteria species. While most cases care caused by group A streptococci such as Streptococcus pyogenes, the same pathogen that causes strep throat, other pathogens can also infect the skin layer called the fascia. Some of these pathogens are Klebsiella species., Clostridium species., Escherichia coli, Staphylococcus aureus, and Vibrio vulnificus, a bacteria found in brackish water. Hospital-acquired infections are also caused my a myriad of species of bacteria. The most prevalent are known as ESKAPE pathogens, and many are the same as those involved in outbreaks of necrotizing faciitis: Enterococcus faecium, Staphylococcus aureus, Klebsiella pneumoniae, Acinetobacter baumannii, Pseudomonas aeruginosa, and Enterobacter species. Why the overlap? These are common bacteria that around found in our environment and even on our skin.

#2 Certain Individuals are More at Risk

Individuals with open wounds, a weakened immune system or certain chronic conditions (diabetes, kidney disease, liver disease, cancer) are at greater risk of developing a dangerous infection if exposed to disease-causing bacteria, whether while swimming in natural bodies of water or receiving medical care in a hospital. Why? Those with open wounds (even small cuts) present easy access for the bacteria to the sterile parts of the body, where nothing can quickly stop the bacteria from thriving and causing an infection. Weakened immune systems also present bacteria with less of a fight, giving them time to reproduce and spread before the body has a chance to fight back.

#3 We're Kind of Making It Worse

We'd like to think that human behavior could never impact the chance of getting a dangerous infection from a lake or from a patient room. But there are things that we are doing, as a civilization, that are putting our vulnerable brothers and sisters at greater risk. In the case of contaminated water, our impact on climate change is affecting the availability of warm, salty water in which these bacteria thrive. Our increased use of antibiotics in agriculture means run-off kills weaker bacteria, allowing surviving (now resistant) bacteria to thrive. The same thing happens when we over-prescribe antibiotics as treatment, using broad-spectrum medications when a more narrow-focused antibiotic would do, or prescribing them for viruses or other conditions not affected by antibiotics. We are allowing resistant bacteria to proliferate, and are paying the price at the beach and at the hospital.

Individuals can help avoid getting necrotizing faciitis by not going into bodies of water that are closed due to high concentration of bacteria. Look online for beach warnings, or look for signs posted at beach access paths. Even if the water you swim in has no posted warnings, it's an excellent idea to take a shower immediately after swimming and to check your skin for any sore or red spots. If you suspect a possible infection, seek medical help immediately.

Preventing HAIs is not easy or simple, but it is possible. When healthcare workers practice excellent hand hygiene, they are taking the most important step in preventing the transmission of dangerous pathogens to vulnerable patients. When hospitals make sure hand-washing supplies are easy to access and plentiful, they support excellent hand hygiene. Hospitals that invest in continuous biocidal technologies, such as self-sanitizing surfaces and air scrubbers, are also taking important steps in reducing the bioburden - the biological contamination - available for transmission.

There are few things with a greater ick-factor than a story about flesh-eating bacteria. We may freak out a little when we hear that 500-1200 cases are reported a year, with many more going unreported. We should be equally freaked out that 1.7 MILLION cases of HAIs are reported each year, leading to 99,000 deaths. Each year. So let's make sure summer's horror-story bacteria gives us additional opportunities to spread awareness about the year-round threat faced by hospitals that kills far, far more (and doesn't make that many headlines).