A Pathogen for All Seasons: Seasonality in HAIs 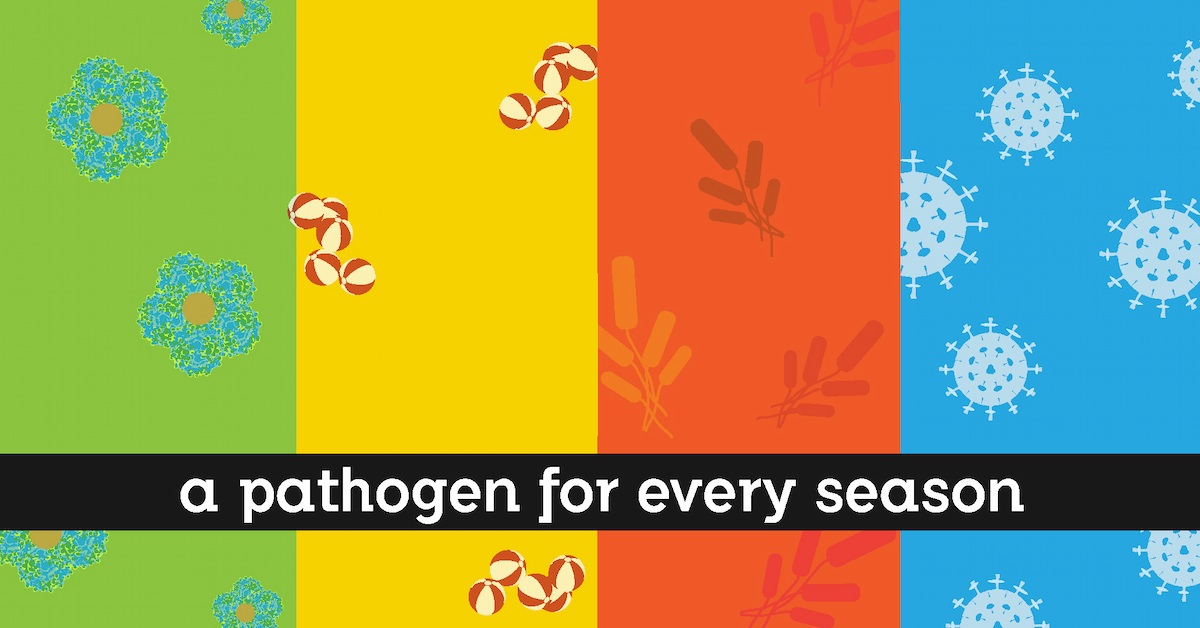 As those of us in the northern hemisphere transition from summer to winter, we will also be experiencing another shift in seasons, especially those of us who live and work in the field of infection control and prevention. Along with the end of warmer months is the end of the summer's favorite pathogens: Gram negative bacteria. And looming ahead in the winter? Cooler months' weapon of choice: Viruses like influenza. We'll explore seasonality in infection control and prevention in today's post.

A recent study proposes the need for a calendar of pathogen peaks to aid in prevention and control of infection. Using decades of research, author Micaela Elvira Martinez of Columbia University made a first attempt at a schedule, identifying pathogens that experience peaks or valleys depending on seasonality. She considered the following four seasonal drivers:

1. Environmental factors | seasonal shifts in temperature and humidity, proximity to bodies of water, urban vs suburban

2. Host behavior | Activities that vary by season, such as exposure to livestock, attendance at school, time spent outdoors

3. Host phenology | Changes to our bodies but also the bodies of vectors of disease (livestock, insects, domestic animals) that are cyclical/seasonal in nature

4. Exogenous biotic factors | Interactions with our environment or the pathogens' or vectors' interactions with the environment as shifts in season occur; this category also includes co-infections such as bacterial pneumonia following viral influenza.

These seasonal drivers impact how long a pathogen can survive between hosts, but also how hosts interact with the environment and each other. Measles peaks during the school year because kids are closer together, enabling transmission. Zika spikes in the summer because we are outside more with the mosquitos that carry it. Even chronic diseases appear to have seasonal factors - many of which are poorly understood at this time. For example, there is a statistically significant increase of children who develop Type 1 diabetes during the winter months, while MS relapses or events tend to peak in late spring/early summer.

There are a number of studies that have tried to pinpoint pathogen peaks by season. While there are some conflicting results among the studies, one of the most consistent correlations between infection and seasonality is the prevalence of Gram negative bacterial infections during the summer. While Gram positive bacteria are prevalent all year long with no noticeable seasonal peaks, many studies have shown that Gram negative bacilli and cocci flourish in hot, humid months. Not only is this pattern seen in patients arriving to the hospital with an infection, but also in the patterns of HAIs, from SSIs to CLABSI.

The other well-defined correlation is the influenza peak during the winter months. But this peak also includes other viruses such as rhinovirus (the common cold), norovirus (stomach bug) and rotavirus (childhood virus for which there is a vaccine). Viruses like cooler, dry air - but they also benefit from the effect of cold air on our bodies. It slows down our mucus movement, meaning viruses can hang out longer in our noses, and it may even impact phagocyte production, meaning there are fewer white cells available to kill the invaders. It is a complex web of factors that researchers are only beginning to untangle.

Anyone with decades of experience in infection control can tell you that bacterial infections are more common in the summer, while viral infections are more common in the winter. This knowledge has been around for as long as recorded history - even the word "influenza" comes from the centuries-old Italian use of the descriptor "influenced by the cold." What this author's research brings together is all the research behind confirming this anecdotal evidence, and proposes determining the way the seasonal factors work together to set the stage for an outbreak or peaks in infection.